All Ireland Colleges Title For Daly. 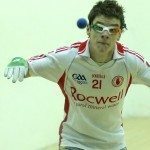 Dean Maguirc College pupil Caolan Daly once again showed why he is one of the most gifted prospects in handball today, as he claimed another All-Ireland College’s Title.  This is an excellent achievement for Caolan and the school and comes only 6 weeks after taking the Under 19 US National Title. 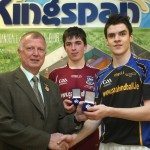 Caolan played Jamie Lynch from St Josephs, Tulla, County Clare in the semi final.  This was a tough game for Caolan as the young Clare player started off very strong and had him quickly on the back foot.  Jamie built up an early lead of 10 – 4, and Caolan looked in trouble, However, he soon got settled into his rhythm and played some excellent handball to bring the game back to 14 each.  With the game in the balance Caolan showed his mental strength to push on and win the first game 21-15.  In the second game despite some very strong handball from his opponent, Caolan was able to dominate and go on to win the game 21-11.  The game lasted almost 90 minutes, while in the other semi final Martin Mulkerrins from St Marys College, Galway defeated Eoin Hennessy from Castlecomer CS 21-2, 21-5.  This gave Mulkerrins an advantage going into the final considering he had played a less competitive match.

The final was the most anticipated game of the day as Martin Mulkerrins who like Caolan is regarded as one of the best up and coming prospects in Ireland.   Martin was unable to play in the trials for the Irish national team as he was injured.  So everyone in handball circles was keen to know which player would come out on top.

The game lived up to all expectations and became an impressive battle between two very talented players.  Mulkerrins showed what a class act he is when he took control of the first game and after almost 45 minutes completed a 21-15 victory.  The second game continued as the first had ended with Mulkerrins looking in control, Caolan was finding it difficult to come to terms with the pace at which Mulkerrins was playing.  At 10 -2 down in the second game, Caolan took a time out, and used the 30 second break to his full advantage to get himself more focused and get his breath back.  It was from here that Caolan really moved up a gear and was soon able to compete for every ace.  He also got his serve going and fought his way back to win the second game 21-16.

The tie breaker was also a very tense affair with both players finding it difficult to pull away.  However, Caolan suddenly got a string of great shots together to go 18-10 up.  It looked as though he had broken the deadlock and was comfortably going to win.  But once again the young Galway player was not going to go down without a fight and begin to get his kill shot going.  He came back to 18 each, and at this stage both players were beginning to look tired.  They traded points and at 20 each Caolan pulled of an outrageous kill to get in to serve, this showed the winning mentality he possessed and he finally won the game 21-20.  Both players had given every ounce of energy and were a credit to both schools they represented.

The President of the GAA Handball Association Tony Hannon was there to present the medals and said it was one of the best games he was fortunate to witness.