Handball as a sport has always been popular in Tyrone but lately this popularity has moved to a new level. The Handball Programme on TG4 has helped promote the game to a newer, wider audience and National Handball Officer Chris Curran from Loughmacrory has played a key role in this development. This Monday’s programme will have a particular Tyrone flavour with former star footballer Peter Canavan featuring prominently. The Cookstown based teacher will be explaining how the introduction of a new 5-court Hand ball Complex  in the school has led to an explosion of interest and participation in the game. Also in focus adding further Tyrone interest to the show will be a feature on 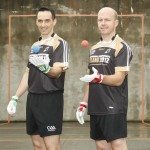 recently crowned US National 19 & Under champion, Caolan Daly, and his club Carrickmore in Tyrone.