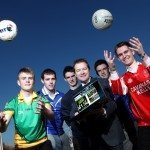 Students taking part in Ulster College competitions were today invited to apply for the BT Education Bursary, a cash contribution of one thousand pounds that will be awarded to five Ulster College GAA players each season.

The BT Education Bursary, now in its second year, is the latest initiative in BT’s ongoing sponsorship of the Ulster Colleges. The bursary rewards five exemplary players between the age of 16 and 18 with a financial contribution towards their further education.  Each award will be based on a demonstration of inspiration, a positive attitude, maximizing potential, sportsmanship and student’s contribution to the wider school community.

Peter Morris, BT Consumer Director said, “BT has supported Ulster Colleges competitions for almost a decade. The BT Education Bursary Scheme was developed to help students with their next steps in education and help them to achieve their sporting aspirations and their educational goals.

“As one of the major employers in Northern Ireland we have a responsibility to ensure our young people are equipped with the skills they need to help drive the future economy.  So I am personally delighted to announce the scheme is running for a second year and is open right now for nominations.

“BT is closely associated with, and is organiser of, a variety of educational initiatives, including most notably the annual BT Young Scientist & Technology Exhibition which culminates in a display of extraordinary achievement and ingenuity in Dublin each January. I would like to therefore encourage as many students as possible to apply for the BT Education Bursary and I wish them well with their entries.”

The announcement was made today alongside the launch of a new online competition for Ulster Colleges affiliated schools called “BT MacRory Countdown”.  The competition has been created to celebrate the excitement around the upcoming BT MacRory Cup Final taking place on 17th March between St Patrick’s Academy Dungannon and St Colman’s College Newry.  Every day in the 15 day run up to the final, BT will be giving away a selection of fantastic prizes for students and schools on the Ulster Colleges website www.ulstercolleges.gaa.ie.

Peter continued, “The BT MacRory Cup Final is one of the most exciting days of our extended sponsorship of Ulster Colleges and we wanted to mark this fantastic final with a countdown event that would reward and celebrate all of the students and schools who participate in Ulster Colleges competitions throughout the year.”

Nominations for a BT Education Bursary can be made by teachers and coaches on behalf of eligible students.  Online application forms can be found on the Ulster Colleges website www.ulstercolleges.gaa.ie.  T&C’s apply for both the bursary and countdown competition. Applications for this year’s bursaries will close on 15th April 2011 and winners will be announced in June 2011.