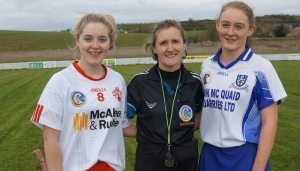 The Tyrone county minor camogs made the relatively short journey to Clontibret to play Monaghan in their second fixture of their All Ireland Minor C Shield Championship. In their previous outings in the competition Tyrone enjoyed a comprehensive victory over Donegal while Monaghan had an away win over Wicklow.

There was little wind to speak of and what breeze there was, was blowing across the pitch as the fixture got underway.

The home team settled very early on applying constant pressure on the Tyrone full back line. The Farney girls took the lead within five minutes with a point from open play just in front of the goals.

With the play ebbing and flowing from one end of the pitch to the other both sides were enjoying the wide open spaces. 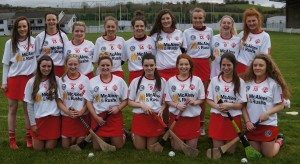 Monaghan were awarded a lot of frees in the first fifteen minutes but Tyrone’s defence held strong with Orla Donnelly clearing her lines on many occasions. Catherine Muldoon finally got Tyrone’s first point from open play following a sublime pass from Niamh Forker. Both defences held firm but quite a few frees were conceded as Monaghan pushed home territorial supremacy. Maebh Maxwell in the Tyrone goals made a few goal line clearances that kept the scoreboard level. It was on the twenty five minute mark that Monaghan finally found the back of the net when Roisin O’Sullivan burst through and took her score well.

The last five minutes saw the Red Hands under serious pressure but Laura Mason and Cliodhna Colton kept their nerve to ensure their side did not concede any further scores. The half time whistle sounded with a score-line Monaghan 1-1 Tyrone 0-1.

Monaghan took to the field for the restart and began where they had left off in the first half with a strong determined push forward. A point with a minute on the clock extended their lead. Roisin McErlean who was on free duty pulled a point back from the 45 metre line. Tyrone then had a series of wides as the game flowed from end to end. Monaghan’s captain Hannah McSkeane extended their lead with an excellent point from open play. Donnelly again was called into action and she showed her defensive qualities clearing her lines.

Tyrone had a number of good passages of play and just past the twenty minute mark Casey Gallagher sent a rasping shot past the Monaghan goal keeper to leave a single point between the teams.

With three minutes left on the clock Monaghan doubled their lead with a point from a free but they missed the chance to extend their lead further when they failed to find the target with another 45 metre free.

The Tyrone camogs kept their intensity levels high and McErlean found free space and made a beeline for the goals before sending the sliotar into the back of the net. It was the first time the visitors led in the game and what better time than with only seconds remaining.

From the resulting puckout Cara Little won possession, brushed past her marker and finished to the back of the net to give Tyrone a vital win.

Tyrone will now play Wicklow in the last game of the round robin set of games on 26th March at home.