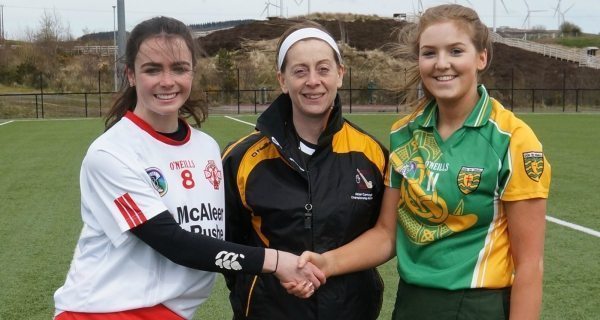 The county minors took to the field on Sunday in the NWP Recycling championship fixture in Garvaghey knowing a win would book a place in the final. It was a much changed starting line-up from last week’s team that saw the Red Hands dominate Monaghan in the same competition.

Donegal won the toss and opted to play with the strong wind in their favour in the first half. It was bitterly cold and the players on both sides found the conditions difficult.

Donegal enjoyed a lot of the early possession and used the wind to their advantage with their midfield peppering the Tyrone defence. Donegal’s Niamh Doherty made full use of their possession and bagged the first goal of the game on the five minute mark.

Shortly after that they extended their lead with a well taken point from Maria Coyle. The visitors continued to press but found Laura Mason in defence at her absolute best as she repelled countless Donegal attacks.

It took Tyrone until the twelve minute mark before they managed to enter Donegal territoty however that only resulted in a wide. Aisling McLaughlin was introduced with fifteen minutes on the clock. Tyrone hit a series of four consecutive wides as they warmed to their task.

Donegal pushed hard on the Tyrone goals again but it was Mason once more who stood firm in defence. Maeve Maxwell in the goals was impressive and stopped a few goal bound chances. Kyra Donnelly and Rona Mallon did most of the pressing for Tyrone as the half progressed but the Red Hands failed to score as the half time whistle blew with the score at the break reading Tyrone 0-0 Donegal 1-1.

Tyrone made further changes in personnel at the start of the second half and with the wind advantage it paid immediate dividends. Niamh Forker, Rosin McErlean and Catherine Muldoon all scored a goal apiece inside the opening four minutes. Casey Gallagher added a point and almost immediately McErlean took her first point.

The game had turned on its head inside the first five minutes of the second half. Donegal did manage to add a goal but Muldoon for Tyrone took one of her own from close range. Aoife Morgan then launched a ball from the half way line on fifteen minutes that sailed straight into the back of the net to extend Tyrone’s lead.

From the resulting puck McErlean evaded her marker and from a very tight angle added a point to her tally. Donegal were awarded a free and the sliotar landed perfectly for Leanne Kelly who scored the third and final goal of the game for the visitors. It was Muldoon, Tyrone’s prolific scorer, who in the dying embers of the game added the final goal to end Donegal’s hopes of an Ulster Title.