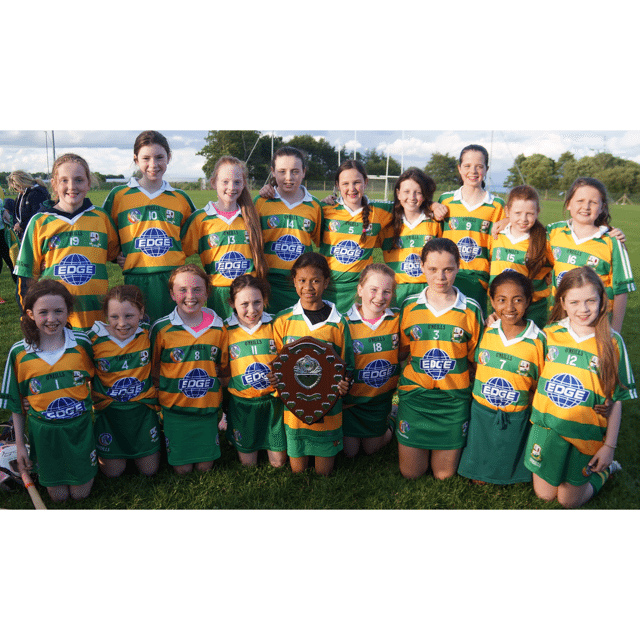 The two finalists Edendork and Eglish had previously played out a draw in the league and another close encounter was expectd this time.

The game certainly lived up to expectations for the huge crowd in attendance. This age group plays two 20 minute halves.

It was end to end in the opening minutes with both sides creating early scoring opportunities. There were a few goal mouth scrambles but with the defences on top the game remained scoreless until the seventh minute. 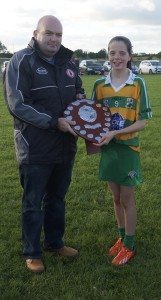 It was then that the defending champions Eglish opened their account when Keeley Fay converted a forty five metre free. Twelve minutes in and Bronagh Mahoon hit the net for Edendork.

Indeed the girls in green and gold came close to making it two goals only to be denied by some strong Eglish defending. Eglish themselves then created a goal opportunity on the breakaway only to see the sliotar sail narrowly wide of the target. As the whistle blew for the break the score read Edendork 1-0 Eglish 0-1.

With both teams pressing hard after the restart it was Mahoon for Edendork that extended her team’s lead eight minutes into the second period with a fine point.

With both defences on top scores were proving hard to come by before Olivia Farley for Eglish brought the sides level. Almost immediately Mahoon scored an absolute screamer of a goal that would have graced any final to retake the lead for Edendork.

From the resulting restart Farley brought the sides level again when she added her second goal of the game. With time running out Edendork sealed the win and the title when Eimear Conway landed the goal that would clinch one of the most entertaining finals seen in years. 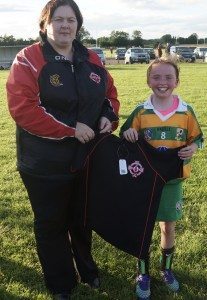 Hugh McCaffery, son in law of Bridie McManamin, presented the winning Bridie Mc Menamin shield to the winning captain Eva Corr. Eva thanked her team and management for all their hard work. A very gracious speech from Eglish captain Eve Hughes received a warm round of applause.

Lara Devlin from Edendork was presented with a crested T shirt for Player of the Final by County treasurer Josephine McKeown.

Tyrone County Board would like to thank Derrylaughan for the use of their facilities, Hugh McCaffery, all the supporters and especially young Orla Donnelly for refereeing the final.