Killyman found Drumquin too hot to handle on Friday and lost out 2-14 to 1-9. Enda Mc Gahan hit 0-5 for his team while Ronan Mc Veigh (1-1) and Eamon Donnelly (0-2) were also on target for Killyman. Despite playing into the breeze Drumquin went into the break leading 1-7 to 0-5. Oisin Gormley top scored for the Wolfe Tones with 0-6 while Mattie Mc Dermott (1-1), Sean Mc Donagh (0-4) and Cormac Mullin (1-0) were among the scores for Drumquin.

Drumragh defeated a much improved Brocagh 4-7 to 2-8 at Clanabogan. The Sarsfields ability to hit goals proved crucial with three majors in the first half. With Mickey Hughes on target Brocagh led 0-2 to 0-1 early in the game but Alex Mc Glinchey equalised before Tommy Murphy got the first of his three goals to put Drumragh ahead. Sean Mc Gale, Murphy and Shane Devine were among the points as Drumragh reached the break  leading 3-5 to 0-5. Mickey Hughes (3), Christopher Becks and Michael Robinson with the first half points for the Emmetts. Hughes added three points in the second half while Christopher Becks and Niall Mc Closkey both found the net. However Tommy Murphy bagged his and his team’s fourth goal to ensure there would be no second half shock for the home side with Shane Devine and Tommy Mullin adding a point apiece. 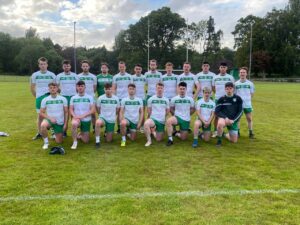 Augher won again on Friday night but were pushed all the way by a determined Castlederg side before coming out on the right side of a 1-12 to 0-12 result. Once again Darragh Kavanagh proved his worth to his team with 0-7 while Conor Mahoney’s first half goal proved equally significant. Castlederg’s Adam Traynor also hit 0-7 for his side while Paddy Lynch (0-3),Bradley Devine and Darren Traynor were all among the points for the Derg men. Ciaran Treanor, Darragh Donnelly (3) and Conor Mahoney accounted for the other Augher scores.

The local derby between Derrytresk and Coalisland on Saturday resulted in a seven point win for the Hill Men 1-12 to 1-5 after Derrytresk had built up a 0-7 to 0-2 lead at the break. Paudie Bell got the all important goal for the winners in the second half while Aidan Mc Cafffrey (3), Ronnie O’Neill (2)  Finty Campbell (2), Liam Slater, Ultan Mc Kee and Pat Campbell 0-1 apiece. Nathan Crawford and Ronan Coney were the men on target for the Fianna.

Errigal Thirds saw off the challenge of Brackaville in their league clash coming out on top winning 0-13 to 1-8. Veteran Davy Harte top scored with 0-5 while Ben Mc Dermott (3), Jody Farrell (2), Darren Canavan (2) and Tam Traynor completed the scoring for the Dunmoyle lads. Ciaran Gervin top scored for the Roes with 1-2 while Ronan Mc Hugh (2), Dale Mc Sorley (2), Shea Fee and Conor Stock were also on target.

Stewartstown were pushed all the way by a constantly improving Fintona side before their greater forward threat saw them saw them take the points on a score line of 1-15 to 1-12. Fintona led 0-8 to 0-7 at the break but a Shay O’Neill goal in the first minute of the second half gave the Harps the platform they needed to go on and win the match. Shay O’Neill (1-2). Shea Burke (0-4) Gerard O’Neill (0-3) and Macauley Quinn were on target for the winners. Fintona might look back on this one with regret having been tuned at 1-12 apiece late in the game. Stewartstown’s greater experience enabled them to see it home with the last three points of the game. Cathal Starrs (1-1), Peter Mc Glynn (0-8), Conor Mc Golderick (0-1), Aidan Donnelly (0-1) and Conor Mc Gillion (0-1) did the scoring for the Pearses.

Strabane travelled up to Donaghmore on Saturday and showed why they are among the favourites for honours this season with a comfortable win over their hosts. Oran Mc Grath hit 0-9 for his side while Haydn Mc Namee bagged 2-4. Conal Crawford (2-2), Anthony Crossan (1-0), Kyle Morrison (0-2) and Gary Quigg (0-1) completed the scoring for the Sigersons while Mark Mc Golderick hit the net for Donaghmore and Eoghan Kavanagh was among the points.

Aghaloo showed why they are so highly fancied to do well this year with a 2-18 to 2-3 win over strugglers Urney on Friday night. With Tiarnan Donnelly leading the way they were seven points clear at the break leading 0-10 to 0-3. Both sides added a brace of goals apiece after the break but it was Aghaloo who came away with the points as they left the home side still struggling for their first win of the season. Jody Mc Glone (1-3), Patryk Kinder (1-1), Niall Mc Elroy (0-3) and Gary O’Gorman (0-2) were among the points for the winners while Cameron Coyle (1-0), Jamie Mc Aleer (1-1) and Ben Gallagher (0-2) did the scoring for a disappointed Urney side.

Neighbours Glenelly and CNG served up a hard fought contest before the home side emerged 0-16 to 1-7 winners. There was little between the sides in the first half with Ryan Tummon’s goal keeping CNG well in it after the opening thirty minutes. Seamus Harkin was back to his best hitting seven points for Glenelly. With the teams level and ten minutes to go CNG missed a great chance of a goal and Glenelly kicked on to win. Ryan Tummon (1-0), Joe Ball (1), Conor Mc Aleer (2), Danny Ball (3) and David Conway (2) were on target for CNG while in addition to Seamy Harkin’s haul Cormac Mc Bride (3), Nathan Mc Laughlin (2), Aodhan Mc Connell, Cathal O’Neill, Rory Kennedy and Garrett O’Neill were also on target.