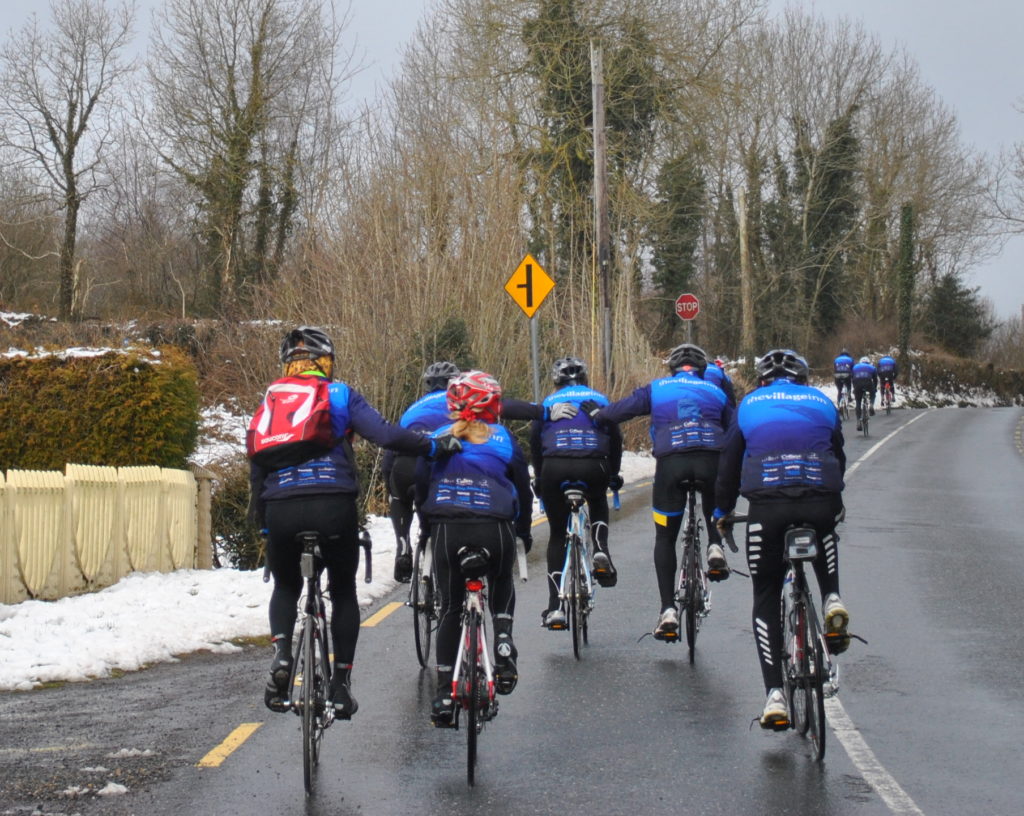 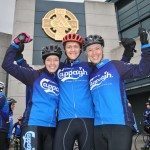 The Parish of Cappagh and the village of Killyclogher are still buzzing after one of the most momentous weekends in their history. Months of planning and practice had gone into preparing the cyclists and support workers as they attempted to cycle from Croke Park to Cappagh, a journey of almost 120 miles. The weekend also coincided with The Ulster Senior Scor Final and the club was very well represented there too.

After being waved off from Headquarters by Christy Cooney President of The GAA the one hundred and sixty plus group snaked their way along Jones Road, past Quinns Pub and led by Garda outriders made for Ashbourne and their first stop. After some quick refreshments the cyclists, now arranged in their training groups began the climb that would take them all the way to Hunterstown County Louth for lunch. Through Slane and Collon, up hill and down, the mighty men and women of Cappagh cycled together providing support and sustenance to one and other as the first forty or so miles were completed.

Following an energy replenishing lunch the group returned to the road and once again the chain of blue made its way through Louth and into County Monaghan before reaching Cremartin where they would rest overnight. Well that was the plan for some but quite a few showered quickly and following their evening meal boarded a bus bound for Newry and the Scor Final. Several were there as competitors and others as supporters but all were there to show what their club meant to them.

Killyclogher took to the stage in four competitions and were rewarded for their efforts with two Ulster titles in Ceili Dancing and Ballad Group. Mind you they came mighty close to winning the Novelty Act and Set Dancing disciplines also but as always they performed exceptionally well. Buoyed by the successes of their Scor club mates the whole group returned to Cremartin to enjoy a great night of fun, craic and good humoured banter before retiring for the night in readiness for the challenges of the last stage of their journey.

Sunday morning and a jovial and excited bunch of cyclists knew that only forty two miles separated them from home and a hero’s welcome. Even the cold and damp weather could not rain on their parade and as the hills of County Monaghan gave way to the by ways of Tyrone the knowledge that the crowd gathered in Clogher to cheer them on was like a shot in the arm for them all. The wheels continued to turn and the adrenalin cursed through their veins as the last stage of the journey saw them approach Omagh and the assembly point at Crevenagh Park and Ride.

Once all were ready the group took to the road for the last time to complete the final mile of their historic trek and what a sight it was to watch the line of blue as it wound its way up through Knock na Moe Bungalows, around Killyclogher Bridge and into the Parish Centre Carpark through the appropriately coloured Finish sign and the magnificent welcome of their admiring fans and friends. The cyclists were joined by family members as tiny tots and grandparents cycled that last mile together in what was truly a real “club” event.

The pride in their achievements and the sense of a unified parish working together towards a single goal were almost tangible and was evident not only in the Parish Centre after the cycle but also later that evening in The Village Inn as the whole group celebrated their fantastic achievements.

This event will undoubtedly raise considerable funds for the club but it was about so much more than fund raising. It brought together so many people who all discovered strengths and talents they never knew they had and learned that their club is about so much more than playing football. The sense of belonging was evident throughout the weekend and all who participated, supported, helped, sponsored or watched could not help but be touched by the unifying effect of this brilliant event.