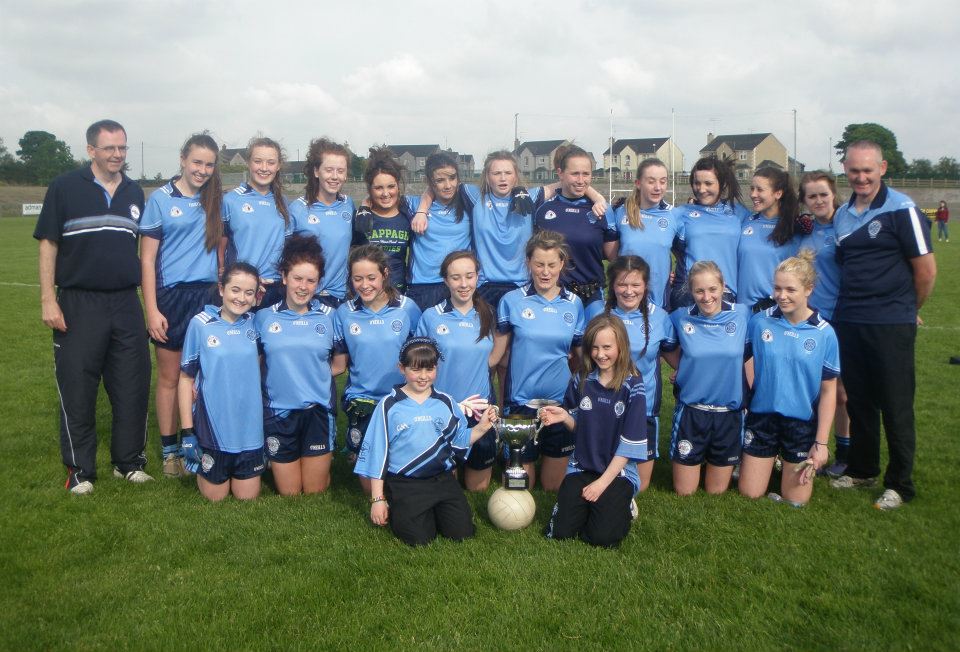 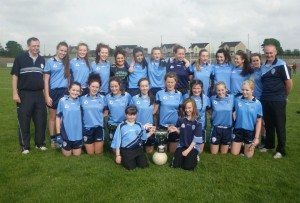 Cappagh Minor Girls made history on Saturday evening by completing the Grade 2 league and championship double. Having secured the championship the previous week the girls faced Sperrin Og, in Glenelly on Saturday evening and emerged on the right side of a 5.16 to 3.06 scoreline. Although Sperrin Og registered the first score of the game, raising a white flag in the first minute, the Cappagh girls went on to dominate the first half. As usual this was a total team display with the girls on top in ever sector of the field in the first half. Cappagh’s mid field pair of Kate McAleer and Aoibhin Bradley dominated the middle of the park and were the catalyst for incessant Cappagh attacking in this period. As they have done all year the Cappagh forwards didn’t disappoint and as always Aisling Porter and Terri McCusker were in superb form. However the younger members of the forward line, certainly left their mark on this game. Louise Sloan hit 2.01 in the opening period, while Aimee Sweeney won countless kickouts and linked superbly with the inside forwards to set up numerous scores. Grainne McCann worked tirelessly at corner forward winning the ball out in front and laying it off to her team mates time after time. Cappagh’s first half dominance was reflected in the half time scoreline of 4.09 to 1.01. Indeed had it not been for the efforts of Sperrin Og goalkeeper Chloe Donnelly and defenders Carla Mc Cann and Ciara Fox the half time deficit could have been even greater.
Sperrin Og had a purple patch mid way through the second half with Niamh O’Neill, Aileen Tuohey and Carla Mc Cann driving their team forward in search of scores. However try as they might Cappagh’s defence stood firm. Molly Keenan, as she has done all year, commanded the edge of the square while Megan Monaghan and Cara Flanagan swept up everything that came their way in the half back line. Again the younger members of the defence rose to the challenge. Noleen Carland, operating at half back, made countless interceptions and carried the game to Sperrin Og at every opportunity. Kerri Quinn was stationed in her customary corner back role and performed her duties impeccably with minimal fuss. Kerri was isolated 1 on 1 for long periods of the second half but somehow managed to win possession on every occasion. Bronwyn Kelly had another great game in goals making two or three top class saves to keep Sperrin Og at bay.
Emma McAleer, who had been struggling with injury, came on in the second half to provide a steadying influence just when it was needed, and popped over a lovely point to keep the scoreboard ticking along. Jessica McCullagh, Sarah Bogues, Deborah Hall, Ciara McDermott and Niamh Winters all made valuable contributions throughout this season that has seen them end the year unbeaten and crowned double champions.