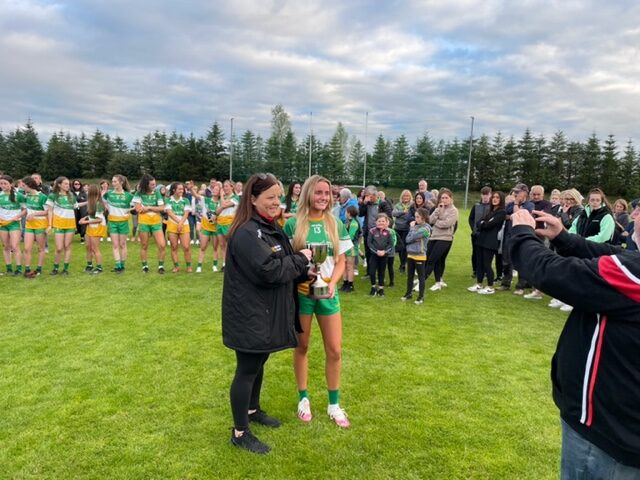 Carrickmore ladies minor side completed the league and championship double on Tuesday evening when they defeated a talented Omagh St Endas team 4-13 to 2-11. This win also completes a run of three minor championship titles in a row for the club but they will surely agree that this win was probably the biggest challenge they faced over the course of this very successful run.

Emer Mc Canny opened the scoring with a point from the penalty spot after two minutes as both teams hit the ground running. The soon to be America bound Clodagh Munroe tied the game before Omagh pulled two clear with a brace of Aine Cunningham points. Omagh came close to extending their lead when a fiercely driven shot by Aine Strain rebounded off the cross bar. Sorcha Gormley converted two  frees to tie the game before Maeve Mc Crystal pointed to put Carrickmore 4-3 ahead.

Omagh continued to battle hard with the strong running of Mc Canny and Strain in midfield at times asking serious questions of the Carrickmore rearguard. Emer Mc Canny and Sally Mc Menamin converted points before Carrickmore goalkeeper Rosie Kerr made the first of three superb saves in goal. Boosted by the save Carrickmore extended their lead with another Maeve Mc Crystal point and a further 1-3 from Gormley whose goal came from the penalty spot just before the half time whistle.

Omagh came out for the second half in determined mood as Mc Canny and Strain dominated the midfield battle winning possession and putting Carrickmore on the back foot. St Endas knew they had to chase the game but in doing so they left spaces at the back which Mc Mahon, Gormley and Munroe were quick to exploit. Omagh did hit the net with a brace of goals and forced Rosie Kerr into two fine saves but in spite of the best efforts of the Mc Canny girls, Aine Strain, Aine Cunningham, Aoife Duddy, Shauna Mc Crory and Emer Cunningham they were susceptible to the fast breaking Carrickmore counter attack.  With eight minutes of the second half remaining Sorcha Gormley completed her hat trick and herself and Munroe added points to seal the win on a final score of 4-13 to 2-11.