Cavanagh Goal Highlight Of The Night. 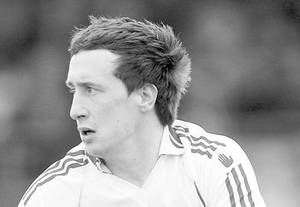 Although conditions at O’Moore Park made life difficult for both teams, Tyrone managed to produce some of the best football they have played as a team in quite a while. Their work rate, passing and support play were all of the highest order and led to many fine scores. Brian Mc Guigan’s points in the first half were of the highest order, well created and executed but surely the highlight of the night in scoring terms was Colm Cavanagh’s fabulous fisted goal midway through the first half.

Cavanagh has often played a supporting role to his older brother Sean but last night he showed he can mix it with the best. His overall game was excellent as he put himself about all over the field. Although he ended up being forced off with a facial injury he will remember this game for quite a while and most particularly that wonderful first half goal.

The move began deep in the Tyrone defence with Dermot Carlin breaking up another Laois attack and almost immediately Tyrone went on the offensive. Martin Penrose and Brian Mc Guigan were both involved as the ball was worked wide on the right. Stevie O’Neill and Owen Mulligan pulled their markers out from the square and Colm Cavanagh surged through the middle unmarked and undetected.

The ball from Brian Mc Guigan was inch perfect as it hit the space perfectly between the full back and the goalkeeper. Cavanagh launched his large frame at it as the keeper attempted to close the gap between himself and the Tyrone attacker. The net bulged and the crowd cheered and as the whistle sounded three players were lying prostrate on the ground. Fortunately all three were able to continue after some treatment and the goal proved decisive in the end. It was not only the key score of the game but the best score of the game and worthy of winning any match. It certainly boosted Colm Cavanagh’s confidence and in spite of the heavy knock he suffered he carried on and produced as good a display for Tyrone as he has shown since he first broke through onto the senior team. 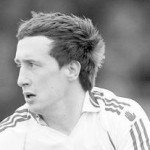