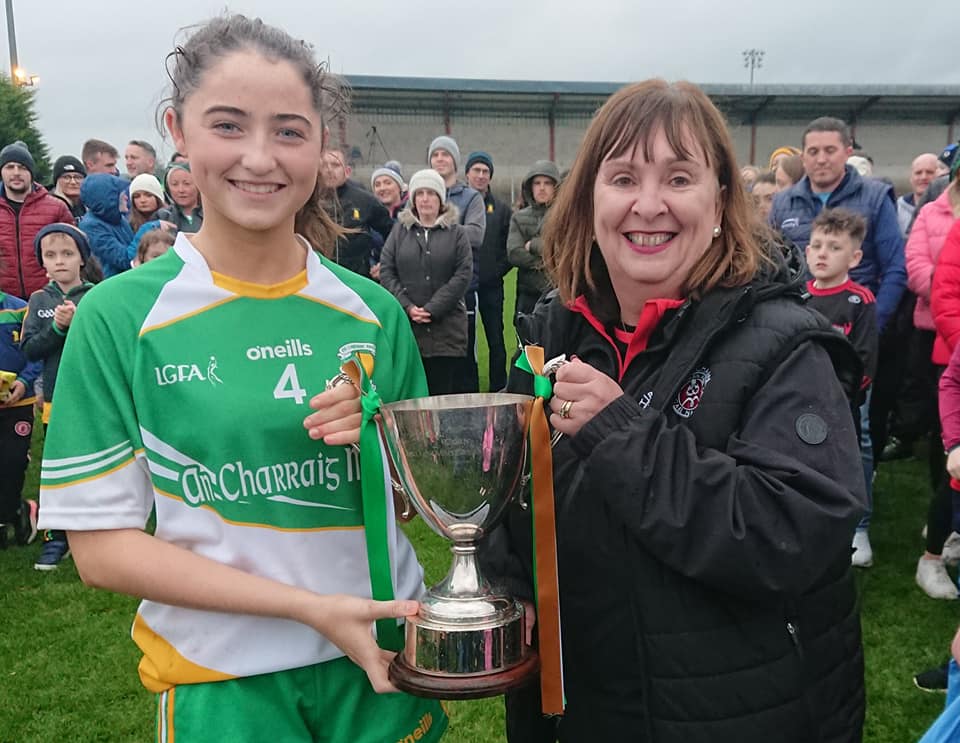 The ladies championship finals at Galbally on Saturday drew a large crowd and resulted in wins for Moortown in the junior final and Carrickmore in the senior. Moortown produced a superb last quarter comeback to stun Kildress and claim the title while Carrickmore were always on top in a low scoring senior game that saw them take the title and end Macartans hopes of six in a row. Carrickmore goalkeeper Dearbhla Donaghy was outstanding for the winners making four top quality point blank saves to help her side to victory.half was

Playing wind assisted Moortown began well and were 0-4 to 0-1 ahead after seven minutes with midfield duo Chrissie Devlin and Emma Murphy impressing early on. Sarah Devlin, Murphy, Donica Ryan and Rachel Tallon all scored as Moortown looked sharp in the opening exchanges. Kildress however settled to their task with Aoife O’Connor, Chloe Tracey and Eilis Keenan outstanding were 1-3 to 0-5 ahead by the water break with Tracey hitting 1-2 and Eilis Keenan getting their other score.

The water break allowed Moortown to refocus and after the restart they hit five of the next six points to move 0-9 to 1-4 in front. Emma Murphy (2), Rachel Tallon (2) and Sarah Devlin scored for the loughshore girls while Chloe Tracey replied for Kildress to keep the Wolfe Tones in it. With half time approaching Eimear Mc Garrity got on the end of a good Kildress move to plunder her side’s second goal to make it 2-4 to 0-9 and put Kildress in a strong position. The outstanding Emma Murphy then replied for Moortown with a superb individual score to round off the first half scoring.

The half ended shortly after when a player from either side was injured and medical assistance given before leaving the field for further treatment. We wish both girls a full and speedy recovery.

Sinead Daly was introduced after the break for Kildress and she made an immediate impact. Along with Stacy Boone, Eimear Mc Garrity and Katie Rose Muldoon she helped take the game to Moortown and put Kildress on top. A goal from Ann Marie Lennon and points from Daly and Chloe Tracy saw Kildress reach the second water break leading 3-6 to 0-10 as solid defensive work from the Wolfe Tones helped hold Moortown scoreless during that third quarter.

Heading into the final quarter it looked as if Kildress would pull away to win but Moortown dug deep and found reserves of character that up until then had been missing. Sarah Devlin pointed before Daniela Ryan hit the net to drag their team back into the contest. Chloe Tracey pointed twice to steady the ship for Kildress and leave the score 3-8 to 1-11 for the Gortacladdy girls with time running down.

Moortown, with Chrissie Devlin and Emma Murphy leading by example, pushed forward in numbers in search of the scores that might save the game. Points from Murphy and Sarah Devlin narrowed the gap before midfielder Devlin popped up at the back post to finish the ball to the net and put Moortown two in front. Kildress looked shell shocked but came back with a point from full forward Shannon Crilly to reduce the gap to a single score. However referee Gerard Treanor sounded the full time whistle and amid scenes of great celebration Moortown were crowned Junior County Champions 2021.

Many of the large crowd present for the first game stayed on to watch the Muphy’s Gloves senior final between Carrickmore and Macartans. This was an intriguing tie with Macartans hoping to make it six titles in a row and Carrickmore determined to show that their mix of youth and experience was the right recipe for championship success.

In a low scoring first half during which both defences were on top scores proved hard to come by. Carrickmore reached the break leading 0-3 to 0-2 with the experienced Clare Mc Gurk and Gemma Begley (2) getting the Carrickmore scores and Chloe Mc Caffrey and Joline Donaghy replying for Macartans.

Although the first half was low on scores there was no shortage of intrigue and tactical play as Carrickmore sought to exploit the scoring threat of Begley and Mc Gurk while utilising the pace and ball carrying skills of Sorcha Gormley. Macartans defended deeply in numbers while hoping to create scores from Chloe Mc Caffrey and Paula Donnelly.

The second half was every bit as close and tactical early on before Macartans lost defender Shannon Mc Quaid and midfielder Tara Meabh Mc Carroll to yellow cards. Clare Mc Gurk pointed a free for Carrickmore before Sorcha Gormley helped set Gemma Begley up for the only goal of the game. Mc Gurk and Begley added a point apiece before Macartans added a late brace of points from Joline Donaghy. However the six in a row seeking champions needed goals but could not breech the well drilled Carrickmore defence for whom Dearbhla Donaghy in goals Caira Munroe and Alannagh Mc Kernan were outstanding.

Carrickmore were deserving winners on the day and can now look forward to an Ulster campaign which will bring this predominantly young side on even further. Final score: Carrickmore 1-6, St Macartans 0-4