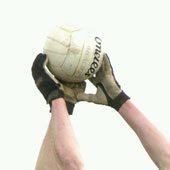 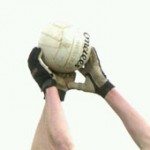 Omagh student Conor Clarke has now played consecutive senior championship games for Tyrone and has looked more assured with each passing minute. Last time out he was detailed to keep tabs on Michael Murphy which he did more than adequately. Today he was tasked with looking after Roscommon danger man Donie Shine which he also managed to do quite well. Indeed Shine was so well curtailed by the entire Tyrone defence that he failed to score at all from play. Meanwhile Conor Clarke continued to impress with a very competent all round display of solid defensive play coupled with some super support work as he got forward at every available opportunity to assist team mates in need.
Clarke has grown into his role on the team and indeed looks more than comfortable as he marauds forward on the occasional solo run. He is very good in possession, capable on the ball, strong in the air and in the tackle and has the look and physique of a man that could well play anywhere on the field with ease. Like his young team mate Darren Mc Curry, Clarke is developing as a county footballer at a serious pace. His versatility and willingness to play anywhere make him a vital member of the squad. With Justin Mc Mahon still unavailable Conor Clarke has shown himself to be an excellent understudy and a more than capable apprentice full back. Like any good apprentice it is all about learning on the job and putting the lessons learned into action. So far Conor Clarke has shown himself to be a very quick learner and judging by how he copes with being in the thick of the action, he looks destined to have a long and successful career as an inter county footballer.