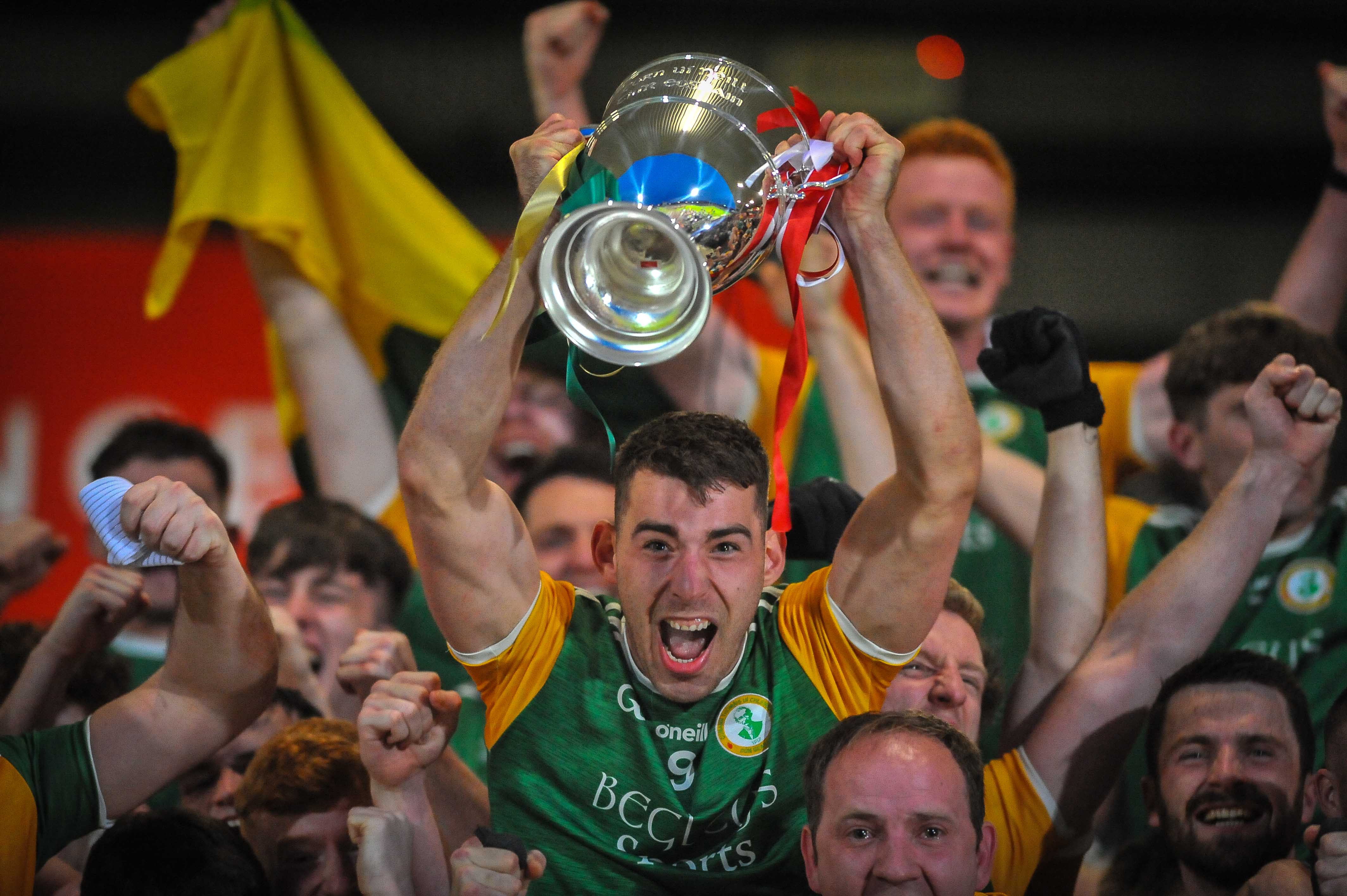 The scenes at the end at Healy Park on Sunday evening showed just what it meant to Dungannon Clarkes as a long wait of sixty four years came to an end when they won the O’Neill Cup for the 11th time.

Once again the Tyrone championship didn’t disappoint with an outstanding decider between two well drilled sides and it was just a pity that it was decided on the lottery of penalties after both sides couldn’t be separated in normal and extra time. After both sides had taken five penalties the score stood at 3-3 so we had to go again. With the score standing at 7-7 Ciaran Barker had the chance to win the silverware for the Clarkes. He had also taken their fifth penalty with a chance to win it but saw his effort saved by keeper Ryan Kelly but this time the semi final hero again come up trumps as Healy Park erupted with Dungannon supporters flooding the field as the long wait finally came to an end. It was an awful way to decide a County final and your heart has to go out to the defending champions who more than played their part in the spectacle but their efforts to hold onto the coveted piece of silverware just came up short. Dungannon though are worthy County champions having been taken to extra time in each of their four championship games and having the character and spirit in abundance to come out on the right side of the result on each occasion.

It’s fair to say that Dungannon looked like rabbits caught in the headlights early on as they had to wait until the 22nd minute for their opening score of the contest. Their supporters have come accustomed to that during their run to glory so perhaps they didn’t panic!!! Lee Brennan hit the opening two scores from frees and in the 14th minute he exchanged passes with Niall Donnelly before blasting the ball to the net past Dungannon keeper Daire Martin. Dungannon missed a couple of chances before full forward Patrick Molloy eventually opened their account in the 22nd minute. Gavin McCarron and Molloy exchanged points before Trillick midfielder Liam Gray made it 1-4 to 0-2. The Clarkes were in trouble but they had the final say of the opening period with a neat point with his weaker left foot from Dalaigh Jones.

Paul Donaghy then landed a brilliant free with the outside of his boot from all of 48m three minutes into the second half before the same player registered from play sixty seconds later. Brennan knocked over a free before Dungannon substitute Patrick Quinn made an early impact when he turned sharply to split the posts. In the 44th minute the Clarkes hit the front when a long delivery in from Donaghy saw Quinn win possession and he clinically finished to the net past keeper Ryan Kelly. Ciaran Barker then converted a 45 to leave Dungannon 1-7 to 1-5 in front going into the final quarter.

Trillick though didn’t panic and after a Brennan free had reduced the deficit to the minimum the same player levelled matters from a sweetly struck 45. Niall Gormley then had a shot blocked but fellow substitute Ciaran Daly scored from the rebound to put the champions back in front with six minutes of normal time left to play. Gormley then pointed from out on the left wing via the post in the 59th minute and it looked like the O’Neill Cup was going back to Trillick. This Dungannon side though never know when they are beaten and a superb point from substitute Kiefer Morgan left it 1-9 each and extra time.

Within sixty seconds of the start of extra time Brennan converted a free and in the second minute Daly got his second score since his introduction. Frees from Morgan and Donaghy though meant that the sides turned around in extra time still on level terms, 1-11 each. Seven minutes into the second period Quinn landed an outstanding score from distance but just when it looked like the winner Brennan held his nerve to convert another placed ball and so we had a penalty shootout.

After the initial five kicks it was 3-3 and the tension was unbearable. The quality and nerve of all the penalty takes has to be commended and when both sides converted their next four each things really were on a knife edge. Trillick then missed theirs and it was left to Ciaran Barker to thump home the winning spot kick on a night never to be forgotten for Dungannon Gaels.