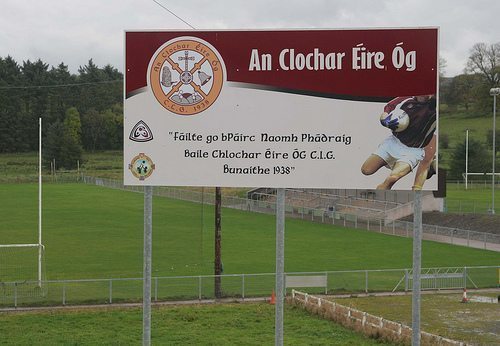 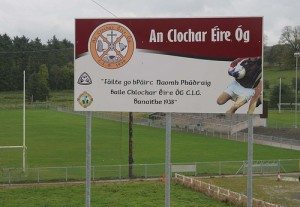 Speaking, prior to the launch of The Clogher Éire Óg’s 75th Gala Celebrations Countdown, Club Secretary Eugene Mc Connell, gave “Team talk” a quick overview of all that is happening as the Club prepare to kick start the Countdown to The Club’s 75th Anniversary next Feb 2013.

Eugene outlined the first part of the Celebration Launch including a special Club Lift- Off, social get together for all club members and supporters on Sat 25th Feb, when a large marquee will be erected at the pitch and will host “A Big Band Night” with the ever popular “Revelates” formerly known as “Blindside” providing the entertainment . This locally based Clogher Valley Group have decided to re-launch their musical direction, with the addition of two new members to the band. Their very first appearance under their new guise will be at Clogher on Sat 25th Feb. This will also be the first opportunity to hear live their new single.

ranks and at the same time start afresh under their new name “The Revelates”.

The Club decided they wanted to commence the countdown to their Big Gala Night Celebrations next Feb 2013 with a series of events throughout the period of the next year. The purpose of each event is to keep the Focus on the Gala night as much to the forefront of all club members and supporters.

The first part of the countdown itinerary, will include this Big Band Night in the

The Club has established a very dedicated sub-committee that has been working tirelessly at planning and putting together all the pieces of the jig-saw ahead of The Big Gala Night next Feb in the Hillgrove Hotel in Monaghan.

This promises to be a night not to be missed for all Clogher Gaels and supporters.

Concluding, Eugene stated that hopefully on the 25th Feb all those keen to hear what exactly is involved will come along and be assured of a fantastic night’s entertainment. The show will get under way at 10pm sharp, refreshments will be served and a late bar will operate.

The Club have also laid on bus transport from the surrounding villages in the Clogher Valley, to help bring the many followers of “The Revelates” to the event.

This is a huge milestone for any Club to reach. It is 75 years since its formation

and it’s a night when all friends and supporters can come along and begin the countdown to the Historic Night itself. Finally Eugene assured a warm Clogher Valley Welcome awaits those who turn up on the night.

There will also be a number of welcome surprises on the night, which will keep

both young and old amused throughout the event.  “Make It A Date” Be There !