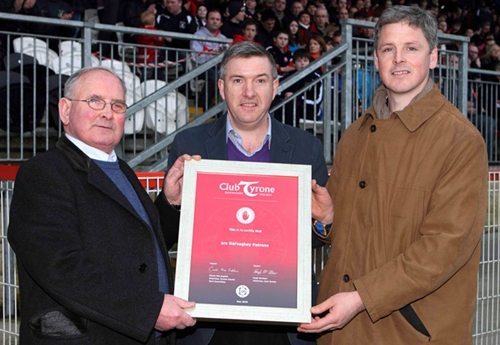 The task of finding the funds necessary to run the various county teams is something that Club Tyrone has excelled in for well over a decade now. In recent years however the emphasis of the fundraising drive has been very much focused on the development of the new £6.7m Tyrone GAA Centre at Garvaghey.

“So far we have five grass pitches in place and we have the funding in place to complete the building. Fit out of the building will require additional support from new members and the installation of a 3G pitch is dependent upon DCAL and Sport NI coming up with the grants that we feel we thoroughly deserve. Croke Park has been very good to us in terms of grants and loans but we would be absolutely nowhere without the support of Club Tyrone members and Garvaghey Patrons. Wednesday 25th April in the Fir Trees in Strabane provides us with an opportunity to inform everyone in North Tyrone as to where we are in terms of funding Garvaghey. We want to encourage as many people as possible to come along because we have also arranged for Mickey Harte to bring people up to date with the Tyrone senior football teams preparations for the upcoming league final and upcoming Ulster Championship campaign.”

Entrance to the night is free of charge. Club Tyrone Night, Wednesday 25th April 2012 in Fir Trees, Strabane at 8pm.