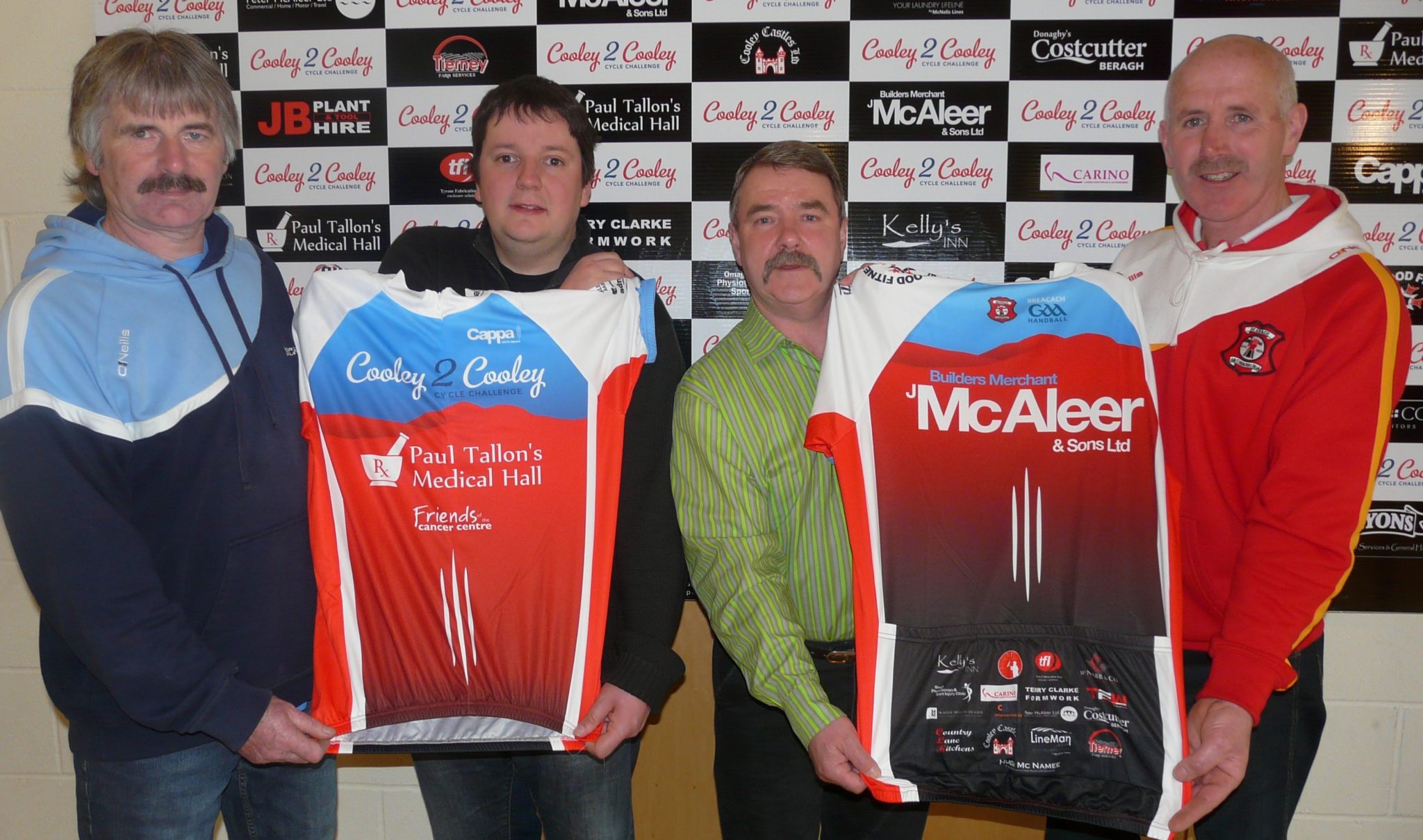 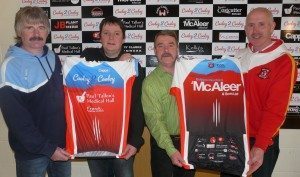 Beragh Red Knights GAA & Brackey Handball Club held their “Jersey Launch and Sponsorship Night” on Monday evening past, 7th May for their 140mile round trip “Cooley2Cooley” Cycle. Amongst the cyclists and various sponsors of the event who packed into the Red Knights Sports Pavilion were the two main Jersey sponsors for the event, “Paul Tallon, Medical Hall Sixmilecross” and “J.McAleer & Sons, Builders Merchants, Curr Road, Beragh”.

The club has been overwhelmed with the number of registered cyclists, having smashed the 150-cyclists target originally set, with still more are registering! With only 7 weeks to go until the event, (23rd – 24th June), cycling to the foot of the beautiful Cooley mountains in Co. Louth is drawing ever so near. Local GAA club, Cooley Kickhams will kindly host a social evening for all cyclists and guests and they will also provide overnight accommodation for the weary travellers! All cyclists will return to our native Beragh club premises in the town land of Cooley the following day. 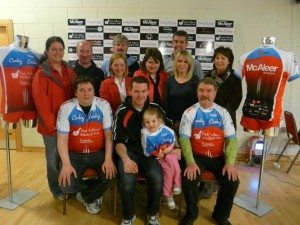 This cycle event has captured the imagination of the entire Beragh community with all families having some link to the event. All cyclists have been placed in teams and they are busy scheduling mornings, evenings and even nights that they can go out to get those miles into their legs. Teams are busy exchanging notes on training routes and miles cycled on every outing, chatting about incidents that have taken place and all wondering will they be able for the 140 miles on the 23rd/24th June. There is also some light hearted banter being added in to keep the “craic” going.

Speaking at the Jersey Launch, Gerard McAleer said “I am honoured to be one of the two main sponsors for the event. We have been supported by the local community for many years in our Builder Merchants’ business, now it is our opportunity to give a little something back and to sponsor this great event. It is obvious tonight what a huge success it is turning out to be.”

Club chairman, Hugh McNamee stated, “The excitement is mounting…..The local roads are buzzing with our biking enthusiasts daily. Who ever imagined it could have escalated into such a huge successful event and not only for the club, but also for the wider community? It has got so many people involved and it has fantastic social benefits with people mixing as a community, never mind the health benefits that the event will have for participants. It is truly great to be a part of it and I want to say a big thank-you to all the cyclists, our many Jersey Sponsors, associate sponsors and the wider community for their support, generosity and backing they have given this Cooley2Cooley cycle”.

Hugh concluded by stating that “It is still not too late to sponsor the event and raise much needed funds required to restore our flood stricken Sports Pavilion and the nominated charity “Friends of Cancer Centre”.

Contact any one of the cyclists if you wish to sponsor them or for more information on the event please contact Niall Farley on 077 5374 1588 or Michael Montague on 077 3012 7106. Alternatively e-mail cooley2cooleycycle@gmail.com and remember you can keep up to date on all events regarding the cycle on the Cooley2Cooley Facebook page or the Club website www.beraghredknights.com