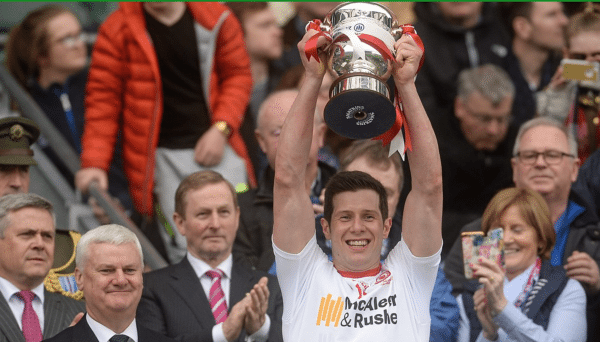 Tyrone senior footballers continued their unbeaten run in 2016 to claim the Division 2 League trophy in Croke Park on Sunday afternoon.  The Red Hands had a 0-11 to 0-8 lead at the break.  The first half was filled with loads of entertaining football and fifteen different players contributed to the first fifteen scores of the game.

Up front Ronan O’Neill with 1-3 and Connor McAliskey with 0-5 were in superb form for Tyrone while Sean Cavanagh looked like a man close to returning to top class form.  Today’s National League win is the third trophy that Tyrone have lifted in five months after the McKenna Cup win in January and the O Fiach Cup in December.

Cavan had a good opening 35 minutes and gave a strong account of themselves but Ronan O’Neill’s goal eleven minutes from time provided the basis by which Tyrone would go on and win the game.  Tyrone were rarely troubled as Cathal McCarron, Ronan McNamee and Juntin McMahon cut out Cavan attacks time and time again.

Man of the Match Tiernan McCann was on hand throughout the game alongside Peter Harte to turn defence into attack.  Final Score Tyrone 1-17 Cavan 0-15