Crozier To Remain As Omagh Boss.


With the dust of the 2010 season having barely settled in senior football you would have thought that most clubs would be spending some time taking stock of their situations and reflecting on what has taken place this year. It is not always easy to measure progress but judging by Ronan Murphy’s departure from Eglish it would appear that sometimes even success such as a return to division one with a league title to boot is not enough. Mind you I would be very surprised if there are any delegations gathering up in either Errigal Ciaran or Coalisland campaigning for a change in their present management. 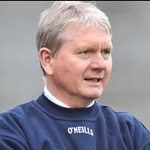 However one club where there had been some doubt about the present management remaining in place was Omagh. The county town club this year had installed Paddy Crozier as manager with Joe Canavan as his number two. Much had been expected from St. Endas this year with so much recent underage success but in truth they failed to make any progress and ultimately came up short when the pressure was on. Their league and championship semi final displays would have appeared to suggest that the team had in fact gone backwards since John Mc Elholm left at the end of 2009.

Unpalatable as it may seem there were rumblings of discontent around Omagh about the direction in which the team was moving and some were speculating that former Derry boss Crozier might well step down. Well tonight it has been confirmed that the well known Ballymcguigan man will remain as Omagh St. Endas manager for 2011 and once again his coach/trainer will be Joe Canavan.

Crozier and Canavan will be hoping their players learn from this year and will look to see further progress from the many talented young footballers at their disposal. However the one big challenge facing the duo is getting more from their attack because as was seen in the championship particularly there was too much expected of young Ronan O’Neill and far too many of the more established senior players failed to carry their share of the burden. It’s quite a quandary for the management to deal with but I would doubt if Paddy Crozier would have considered staying on if he did not feel that he could solve that particular puzzle.