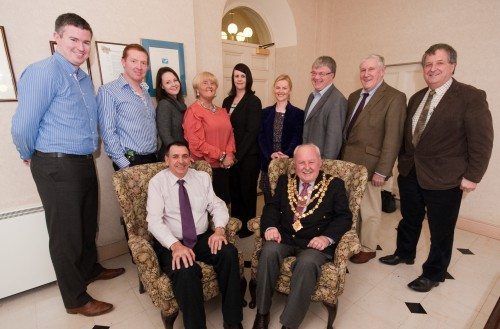 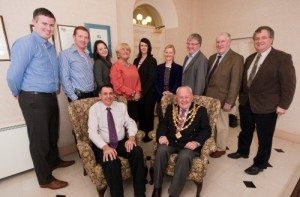 The 13th annual All-Ireland GAA Golf Challenge was officially launched yesterday by Uachtarán Cumann Lúthchleas Gael, Liam O’Neill at Waterford City Hall.
Staged in Waterford Castle Golf Club once again this September, the All-Ireland GAA Golf Challenge is the premier golf competition for Gaels both home and abroad and is run in support of the Waterford Hospice and the Alzheimer’s Society.
This year, an extra competition has been added to replace the Practice Day. On Thursday, September 13th a singles event the “All Ireland GAA Masters” will be staged. The prize will be a wonderful Waterford Crystal perpetual trophy and of course an All Ireland Medal.
Yesterday, Uachtarán Chumann Luthchleas Gael, Liam O’Neill launched the new All-Ireland trophy, a Waterford Crystal replica of the Liam McCarthy Cup.
Speaking at the event, he said: “The All-Ireland GAA Golf Challenge is an excellent way of bringing together GAA people of all ages under a competitive and social banner.It is with great delight that I see two worthy charities benefitting from voluntary efforts. I wish everyone the best and hope to help the competition grow and grow during my term of office.”
The competition’s new website is now live www.gaagolf.com and it is well worth checking out for information and further details. Photographs of the launch will be added to the site in the coming days.
Those involved would like to say a big thank you to the teams that have already sent in their entries and a reminder that spaces and accommodation can only be allocated on a first come first served basis. Several teams from Tyrone have competed very successfully in the competition in the past with both Carrickmore and Drumragh enjoying varying degrees of success since its inception.
Chairman of the organizing group Liam Daniels looks forward to seeing friends old and new once again and all can be assured of a wonderful weekend and with some new entertainment added to the package.