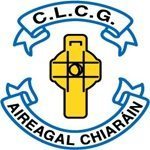 Game of the day in Division One was the match between Errigal Ciaran and Carrickmore which attracted a large crowd to Pairc Cholmcille. There was lots to talk about with two second half red cards and a late goal that saved face for the home side giving them a barely deserved draw at the end.
Errigal were the better side in the first half and following a Peter Harte goal looked to be in a very strong position approaching the break. However Mark Donnelly found the net on the stroke of half time to give his side hope as they trailed 1-6 to 1-4 at the short whistle. Errigal continued to dominate and when Ronan Mc Crory pointed to put them three ahead they looked all set for victory. However Caolan Daly pulled the ball across the goal in the last attack of the game for substitute Barry Daly to palm to the net and draw the game level on a final score of Carrickmore 2-8 Errigal Ciaran 1-11.

Ardboe defeated Greencastle by two points in a tight game at the lough shore 0-11 to 0-9 with Shane Coyle landing 0-5 for the losers while Marty Conway was also among the points for Sean Teague’s side. Ardboe were deserving winners with Brian Mc Guigan, Kyle Coney and Ryan Quinn all on target for the winners.

Clonoe produced a superb display at O’Rahilly Park to see off promoted side Kildress 3-14 to 0-10. Star of the show was under 21 forward Conor Mc Aliskey who scored 3-5 for his side including two goals in the space of a minute. Des Treacy top scored for the Wolfe Tones with four points but there was no doubt who the star of the day was.

Derrylaughan and Eglish played out a 1-8 apiece draw at Derrylaughan. The home side started well and an early Martin Mc Stravick goal put the Kevin Barry’s in pole position. However a Gregory Jordan goal for Eglish but it took a late Michael Jordan point to save the day for the men in black.

Moortown upset the form book somewhat with a home win over Trillick. This result owed much to two first half goals from Daniel Quinn and Conor Herron which put the St Malachy’s into a lead they were never to lose. On a disappointing day for Trillick Philip Mc Gread top scored for the Reds with three points. Final score Moortown 2-5 Trillick 0-5.

Edendork started their season with a victory following a 1-11 to 0-9 win at home to Killyclogher. Under 21 star Darren Mc Curry hit six points for the winners while Brian Mc Guckin scored the only goal of the game. Leo Meenan was the main threat from Killyclogher and hit four points for his side. 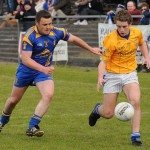 2011 league champions Dromore may not be able to compete for the league title this year but they sent out an ominous warning to the rest of the county with a very commanding 1-14 to 0-8 defeat of Donaghmore at Gardrum Park. Barry Collins found the net for the home side while Niall Sludden and Owen Mc Cusker landed points. Last year’s top scorer in the division Shane Mulgrew began the season with a five point return on a day when his team were well beaten by a very hungry and fit looking Dromore side. 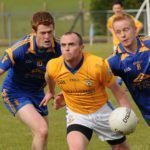 Omagh entertained Coalisland at Healy Park and looked well placed to win a tight game after Hugh Gallagher’s thirty fifth minute goal put them 1-5 to 1-3 ahead. However the game changed following a recurrence of Justin Mc Mahon’s hamstring injury seven minutes later. The big defender and Conan Grugan had dominated the midfield sector after Justy was switched there midway through the first half. However once he went off the game turned and Coalisland with Plunkett Kane and Brian Toner prominent got on top. A Tiernan O’Hagan point followed by an Eoghan Carberry goal drew the sides level on 45 minutes. Omagh were struggling to penetrate a rugged Fianna defence and the men in blue were beginning to find more space in the Omagh rearguard. O’Hagan and Fox spurned chances for goals before Carberry hit the net with his second goal to leave the score 2-6 to 1-6 in favour of the visitors with seven minutes left. Plunkett Kane finished the scoring for his side on a day when Conor O’Donnell picked up a broken nose while landing four points for the losers. Final score Omagh 1-6, Coalisland 2-7. 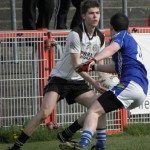