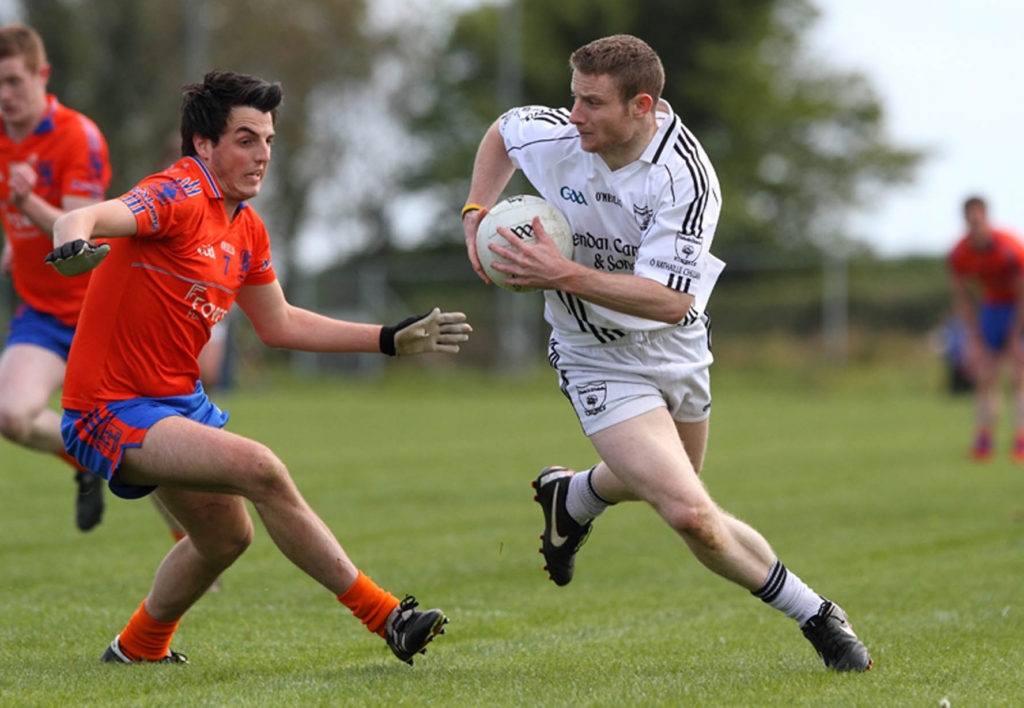 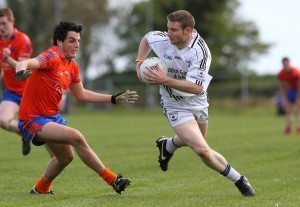 Coalisland Fianna remain the only team in Division 1 to have 100% win ratio and what’s been even more impressive about that fact is that they have all been achieved away from home.  Paddy McNeice was the tormentor in chief this afternoon in Greencastle bagging a goal and a series of points for the Fianna men.  Jason Carberry also kept the scoreboard ticking over while the Greencastle points came via Cahir McCullagh, Shane Coyle and a Peter Teague goal.  Final Score – Greencastle  1-9 Coalisland 2-12

Errigal Ciaran got their first win after two earlier draws despite being behind against Moortown at home in Dunmoyle this afternoon.  Two second half Ronan McCrory goals and a couple of Darren Canavan points spared their blushes.  Moortown were well worthy of their lead at the break thanks to points from Stephen McNally who finished with six out of the eight St Malachy’s points.  Final Score – Errigal Ciaran  2-9 Moortown 0-8

Caolan Daly got Carrickmore off to the perfect start against Edendork this afternoon. His early goal and points from Mickey McCallan helped Carrickmore assert themselves on this tie from the start. Harry Og Conlon was on hand to add a point and a first half goal. The big Edendork man also got a goal in the second half but that was after Martin Penrose had slotted home a penalty which put the game well beyond Edendork’s reach. Final Score – Carrickmore 2-16 Edendork 2-7

Ardboe and Clonoe both went into this afternoon with a 100% start to the 2012 season and although that’s not the case for both of them anymore they remain undefeated.  Clonoe had a wonderful first half performance and led at the break 1-6 to 0-4, Tyrone minor Danny McNulty with the goal.  Points from Michael Hagan kept Ardboe in touch and it was his second half penalty that fired them back into the game.  Brian McGuigan was also on the scoring sheet for Ardboe and Clonoe had Conor McAliskey to thank for slotting over his 7th point of the day in injury time to earn the draw.  Final Score – Ardboe 1-10 Clonoe 1-10

Omagh and new manager Liam Grugan have their first two points of the new season thanks to a comfortable enough six point win away to Donaghmore.  A first half Aaron Grugan goal and points from Conan Grugan and Jason McAnulla helped St Enda’s over the line.  Shane Mulgrew and Mark Heatherington were both on target for the St Patrick’s men.  Final Score – Donaghmore 0-8 Omagh 1-11

League champions Dromore didn’t alway show there top class form in Eglish this afternoon but they did come away with the two points nonetheless.  Paddy Montague was on the first half score sheet with a couple of points.  Points from Martin McCann and a Gregory Jordan goal kept Eglish well within touch.  However Dromore got the vital second half points from Eoin McCusker, Sean McDonald and a Niall Sludden goal to capture the win.  Final Score – Eglish 1-6 Dromore 1-10

Going into this game both Trillick and Kildress were without a point in the league.  Trllick managed to record their first win at home in Donnelly Park today thanks in no small amount to another Donnelly, namely Richard.  The big Tyrone U21 man scored the two Trllick goals to leave Trllick in a fairly comfortably position at the break.  Des Treacy and Frank McGurk with the points for Kildress.  Further points from Paul Treacy and Gavin Treacy pulled the game level but Richard Donnelly had the final say landing an injury time point to snatch the win.  Final Score – Trillick 2-7 Kildress 0-12