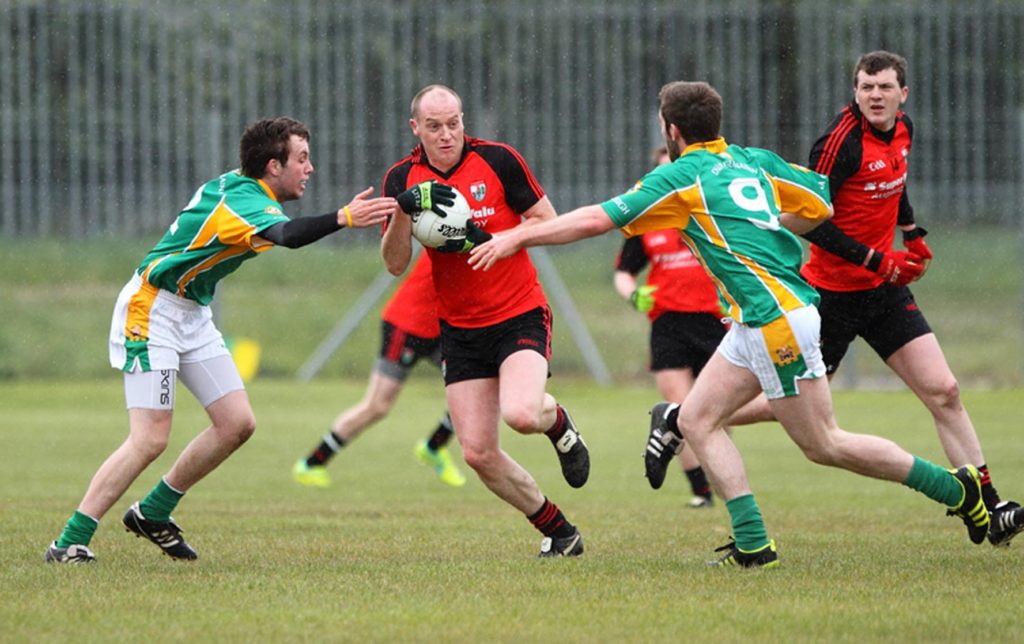 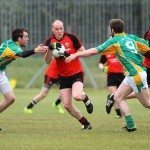 As it was all over the county this afternoon the weather played a central role in today’s game making good football difficult for both teams. Dungannon played very well in the first half and Patrick Quinn’s goal helped give the Clarkes a commanding 1-06 to 0-01 lead at half time.

Aghaloo and Tyrone minor player Ruairi Mc Glone hit the back of the net early in the second half and with the help of the wind Kevin O’Gorman and substitute Stephen Donnelly added points to the scoreboard to narrow the margin to 3. However Dungannon’s Padraig Mc Nulty, Jonathon Toal and substitute Sean Molloy added further points to seal a Dungannon Clarkes victory on a scoreline of 1-12 to 1-07 for their fourth consecutive win of the season 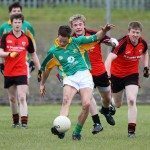 Fintona took the points at Beragh today despite a final quarter flourish from the Red Knights.  Beragh opened the scoring through Niall Owens and a Martin Rodgers free before Fintona drew level with a Benny Mc Carney point and an Aaron Mc Carney free. Mark Kelly then pointed before an interception by Fintona’s Conor Mc Cann and a quick ball forward ended with Mark Donnelly pointing.  Dan Boyle replied for Beragh to leave it  4-3 for Fintona.  On 22 minutes Beragh were awarded a penalty but Fintona keeper, Ryan Monteith, saved brilliantly from Martin Rodgers’ effort.  Declan Mc Cann pointed, however, to level the match.  Niall Donnelly then came up from full back to point a 45 but 2 minutes later Paul Owens equalised for Beragh.  The final score of the half was an Aaron Mc Carney free for Fintona to give the Pearses a 6-5 lead at half time.

With less than 2 minutes on the clock in the second half, Mark Kelly pointed for Fintona and a minute later a long ball into the square by Sean Connolly was flicked to the net by Aaron Mc Carney.  2 minutes after that another long ball was launched in by Benny Mc Carney and this time Cathal Moore beat the keeper to the touch to find the net.  Eddie Molloy pointed for Beragh to make it Fintona 2-7, Beragh 0-6.  At this stage Fintona suffered 2 blood substitutions which seemed to unsettle them and 3 Rodgers frees and a couple of points from play from Mc Cann and Boyle had Beragh within 2 points but Paul Martin got on the end of a ball into the forward unit to finish to the net in what was the last play of the game.  Fintona 3-7, Beragh 0-11.

Drumragh lost out heavily against local rivals Tattyreagh 0-7 to 2-12. There could be no complaints from the Sarsfields men following this comprehensive defeat but the sides were level at 0-3 apiece after fifteen minutes. Two goals in a five minute burst from top scorer Conor Taggart who finished with 2-7 for Tattyreagh put them in a very strong position at the break leading 2-6 to 0-5 and they controlled the game easily after that with great performances from Chris Mc Carroll and Declan Gallagher.

Castlederg picked up two good points edging a low scoring tense game against Owen Roes by a single point 0-8 to 1-4. The Derg started well and led 0-3 to 0-1 after twenty minutes with Mark Corry and Conor Mc Callion on target. However the game swung in favour of the Leckpatrick lads after a Brendan Boggs goal put his side 1-2 to 0-3 ahead. A further point from Andy Devine put Owen Roes in a strong position at the break leading 1-3 to 0-3. However they only added a single point in the second half and with Mark Corry finding the target again the Derg held on to win by the narrowest of margins.

Dregish came up short in their derby clash against Drumquin losing 1-9 to 1-4 after a disappointing second half. The winners enjoyed an early lead following a goal from Ryan Mc Callion but Daniel Strain hit the net for Dregish to put them ahead close to the break. Drumquin continued to battle and the sides were level at the break 1-3 each.

The second half saw Drumquin restrict Dregish to a single point and the Tones went on to win convincingly 1-9 to 1-4.

Glenelly enjoyed a hard fought win over North Tyrone rivals Newtownstewart at home 0-11 to 0-9 but the St Eugene’s will be kicking themselves for not getting something from this one. Glenelly moved 0-5 to no score ahead after twenty minutes with scores from Seamus Harkin, Tim Harney and Cathal Nicholas. Tim Harney landed two 45s for his side who reached the break 0-7 to 0-2 ahead with the visitors’ scores coming from Ryan Mayse and Rory Gallagher .

Glenelly were reduced to fourteen men in the second half but Newtown failed to capitalise on their extra man advantage. Several scorable frees were missed as Newtown entered the last ten minutes trailing by four but closed the gap to two and missed a wonderful late goal chance that would have handed them the two points. Glenelly were relieved to hear the full time whistle as both teams finished with fourteen players each.