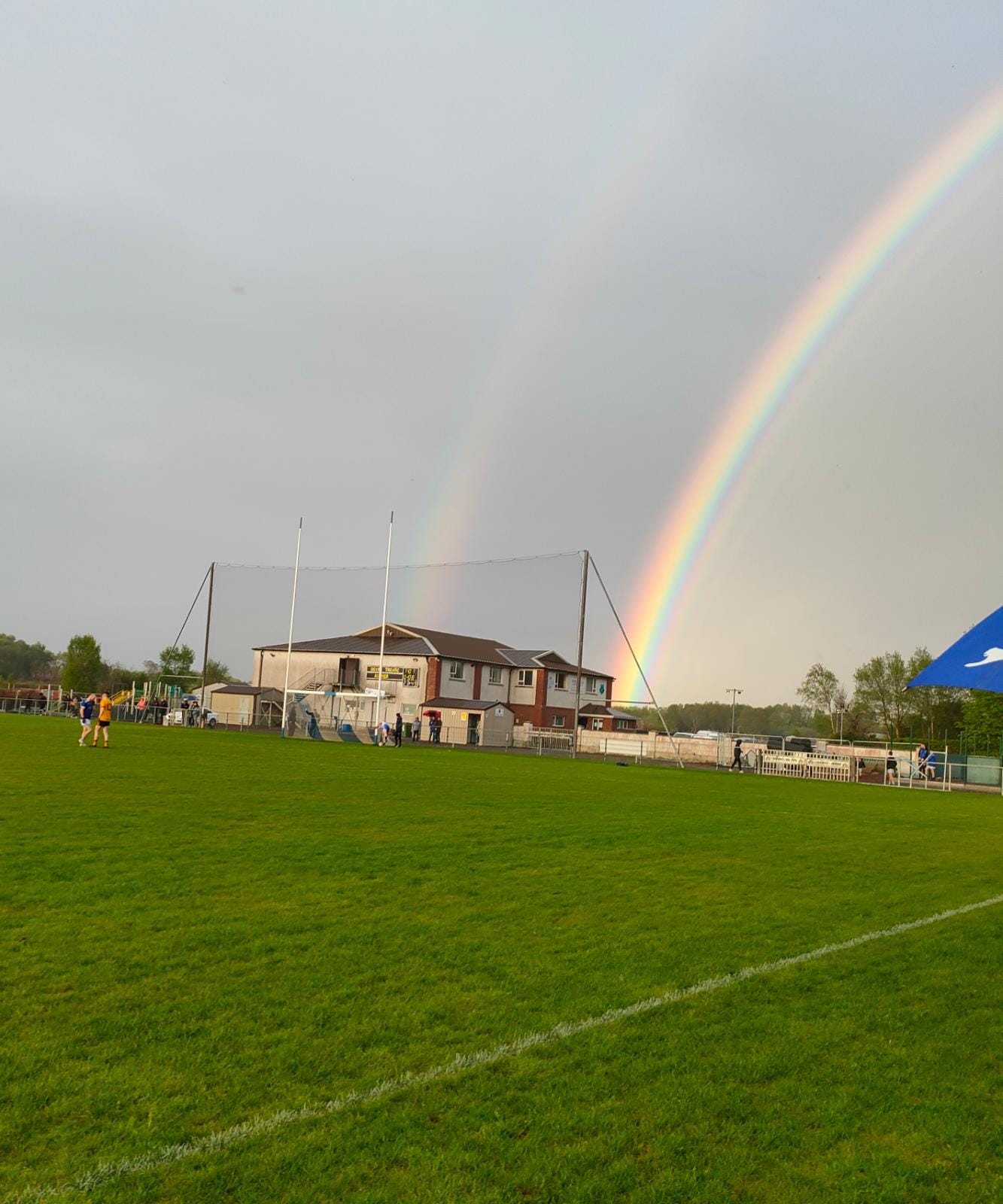 Stewartstown are back in Junior football and judging by their display on Friday night they look well up for the challenge. They faced Coalisland Thirds and ran up a huge tally on their way to an impressive win. Dan Lowe, Shay O’Neill. Gerard O’Neill And Macauley Quinn all hit first half goals as the Harps put Coalisland to the sword. Theo Lowe added two further second half goals while Shay O’Neill also found the net.

Drumquin got their new season off to a winning start with a hard fought 0-13 to 2-6 win over Donaghmore. After a tight first half the Wolfe Tones trailed 1-5 to 0-7 but they restricted their opponents to a goal and a point in the second half while adding 0-6 to their tally to seal the win. Oisin Gormley kicked a superb eight points for the winners while Sean Mc Donagh (3), Cathan Colton (1) and Barry Gormley were also on target. Ryan Mullin and Josh Mc Hugh got the Donaghmore goals while Dualta Mc Kee, Eoin Kavanagh and Conor Mc Ginn were among the points. On their first competitive fixture for the Thirds Donaghmore had good performances from Conor Quinn, Chris Hughes, Mark mc Goldrick and Dualta Mc Kee.

Aghaloo got the new season under way with a hard fought win over Brocagh in their Friday night meeting. Niall Mc Elroy lit up the scoring charts with 3-2 while  Niall Henderson (4) and Tiernan Donnelly (2) shared six points between them. A point apiece from Padraig Mc Geary, Oisin Treanor, Enda Mc Garrity and Gary O’Gorman completed the scoring for Aghaloo. How often do we hear the old saying that goals win matches and it certainly was the case in this one as Aghaloo reached the break leading 3-8 to 0-7. Brocagh tightened things up defensively after the break restricting Aghaloo to four second half points. Mickey Hughes top scored for the Emmetts with 0-5 while Justin Campbell, Niall Mc Closkey (2), Ciaran Campbell and Dean Canavan completed the scoring returns for Brocagh.

Neighbours Killyman and Brackaville met in the opening round of the league with the Owen Roes coming out on top 1-9 to 0-9. The game was close throughout and Killyman were well placed at the break leading 0-5 to 0-4. In tight games like this one a goal is always a huge score and so it proved in this case. With Brackaville trailing by two points 0-9 to 0-7 Jason O’Neill hit the net to put them ahead and late points from Ciaran Gervin (2) and Conor Stock (2) sealed the win. Gary Ferguson, Ronan Mc Hugh, Dale Mc Sorley (2) and Martin Gervin were also on target for the winners. Killyman will be disappointed with the result. Their scorers on the night were Ronan Mc Veigh (3), Enda Mc Gahan (3), Cathal Mc Gahan (2) and Niall Mc Alinden.

Glenelly and Castlederg played out a competitive north Tyrone derby draw on Friday night. Jack Ramsey hit the net for the Derg in the first half while Adam Traynor, Darren Traynor, Paddy Lynch and Bradley Devine each contributed a point for their side. The teams were tied 1-4 apiece at the break with Aodhan Mc Connell  getting the all important goal for the home side. Seamus Harkin (3), Garrett O’Neill (2), Cormac Mc Keown, Cormac Mc Bride, Liam Nicholas and Conal Furey hit the points for the hosts while Adam Traynor, Paddy Lynch, Darren Traynor, Ben Harper and Daire Corry completed the second half scores for the Derg.

In the opening fixture of the season Fintona made home advantage pay as they defeated Urney 1-13 to 0-8. Urney led 0-3 to no score early in the first half but Fintona reached the break leading 0-6 to 0-3. The Pearses continued to control the game and after Conor Mc Gillion converted a 39th minute penalty there was only going to be one winner and Fintona pulled away to win by eight. Mc Gillion top scored with 1-6 while Peter Mc Glynn (4), Conor Mc Golderick(2)and Niall Mellon were also on target. Sean Mc Gowan (2), Ryan Henry (5) and Jamie Mc Aleer were on target for the Urney lads.

Clan na nGael claimed their first two points of the season with a 1-9 to 0-10 win over Errigal Thirds. Errigal led 0-5 to 0-4 at the break but CNG improved after the restart with Shea Browne prominent. His goal from a second half penalty proved decisive in the final outcome. Gareth Mc Dermott hit three of his team’s points while a Jonny Knox point completed the scoring for the North Tyrone outfit. Errigal scorers on the night were Chris Kerr (1), Darren Carson (3), Damien Dasher Mc Dermott (3), Sean Mellon (2) and Pascal Donnelly (1) while both DD MC Dermotts were outstanding for Errigal.

Derrytresk recovered from a sub par first half that saw them reach the break trailing 1-4 to 0-10 to take the points at home to Augher. At one stage in the first half Augher led 0-10 to 1-1 with Declan Conway, Darragh Kavanagh, Eoghan Keenan, Finnbar Mc Elroy and Conor Hackett on target for the visitors. A Niall Gavin goal helped keep his team in the contest and Derrytresk were much improved after the break. The Hill Men produced a superb second thirty minutes to put Augher to the sword on a score line of 2-13 to 0-12. Gavin top scored with 1-8 while Eoin Mc Nally (1-1), Caolan Corr (0-1), Liam Slater (0-1) and Caolan O’Donnell were also on target for the winners. Augher will be disappointed with their second half display that saw them return only two points in thirty plus minutes of football with Darragh Kavanagh and Ciaran Treanor on target.