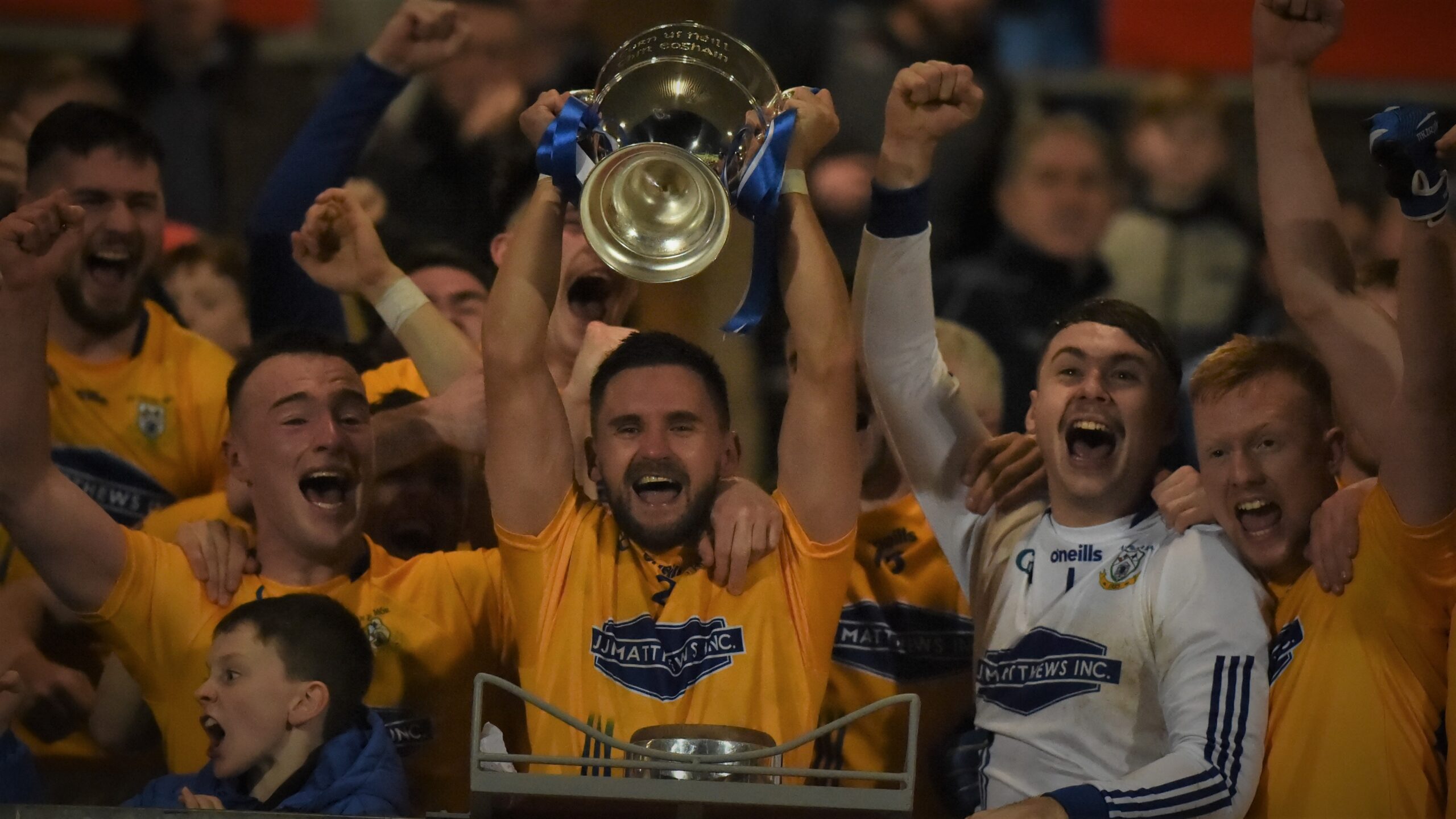 Dromore are Tyrone senior champions for the 4th time in their history as they claimed a first title since 2011 when they were worthy seven point winners over Coalisland at O’Neills Healy Park on Sunday evening.

The sides were locked together on 0-5 each after the first half but in the second period the St.Dympnas got on top and they made it count on the scoreboard as they took any chance that came their way. The Fianna were left to reflect on a first half when they kicked eight wides to Dromore’s two while they also lost Cormac O’Hagan to injury but no doubt they would be the first to admit that the best team won on the day.

Coalisland took the lead in the first attack of the game when a pin point long ball from Bailey Leonard was well taken by Paddy McNeice who turned sharply to split the posts. In the 2nd minute the Fianna almost got in for a goal when a flowing move involving Plunkett Kane, Padraig Hampsey and Michael McKernan ended with the latter having a shot well saved by Dromore keeper Mark McGale. Two minutes later Dromore had a goal chance of their own but Ryan McCusker’s effort was well saved by Fintan Coney with Plunkett Kane completing the clearance.

Coalisland then doubled their advantage when Tiarnan Quinn’s long delivery again found McNeice out in front of his marker and the end result was the same with another quality point. An Emmet McNabb free opened Dromore’s account and the same player then levelled matters with an unbelievable effort from a ridiculous angle out on the left wing. A good move from Coalisland resulted in a point from half back Niall Devlin before Kane made it 0-4 to 0-2 at the first water break.

On the restart Dromore right half back Tommy McCarron reduced the deficit but straight from the kick out Quinn ran fully fifty metres to put two between the sides again. The Fianna had their chances but failed to take them and great work from Ronan McNabb saw him find Odhran Rafferty with a pinpoint pass and he did the rest with a neat finish. It was Dromore who also had the final say of the first half as Niall Sludden and Ronan McNabb junior combined for Sean McNabb to hit a great equaliser from out on the left wing to leave it 0-5 each at the short whistle.

The second half was less than sixty seconds old when Rafferty put Dromore in front for the first time in the contest. Coalisland though responded as full forward McNeice again escaped his marker but with a goal on the cards he blazed over the bar. In the 37th minute Niall Sludden placed McCusker for a goal chance but he shot straight at Keeper Coney. A good run from Peter Teague then saw him win a free which Emmett McNabb converted in the 40th minute for a lead that his side were never to lose.

A poor kick out was seized by Emmet McNabb who placed Niall Sludden for a point and with the County star and Ronan McNabb senior coming to the fore the St.Dympnas never looked back. McNeice did land another quality point but it was Dromore who were now in the ascendency with scores coming from McCusker, Emmet McNabb [3], Sean McNabb and substitute Cahir Goodwin. Coalisland substitute Cathaoir Quinn stopped the rot but it was Dromore who had the final say with a third point from Rafferty. Right at the end the Fianna were denied what would have been a consolation goal when Coney, who was moved out the field with Sean Corr going into goals, saw his shot saved by keeper McGale.