Home | Drumragh CD Launch Proves To Be A Great Success.

Drumragh CD Launch Proves To Be A Great Success. 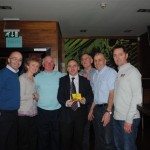 Drumragh Sarsfields enjoyed a fantastic night with the launch of their fourteen track CD Sarsfield Sessions tonight. In spite of the elements conspiring against them in terms of gales and lashing rain a large and appreciative crowd turned up at Sally’s in Omagh to be entertained through music, song and recitation. The CD has been recorded and produced locally with the help of Brian MC Devitt and Gareth Mc Gurgan but it is the talent of The Drumragh Club Members that makes this superb production so noteworthy.

The night was overseen by Cormac Mc Aleer as fear an ti and among the guest speakers were Donal Magee of the Tyrone Culture Committee and Barry Mc Elduff MLA. All speakers paid tribute to this innovative venture and praised Drumragh for the fantastic job they do in promoting Scor and Irish language throughout the club.

The night concluded with a performance from the club’s senior ballad group which once again demonstrated the wealth of musical talent that exists within the club.