Droim Ratha na Sarseil launched their 40th Anniversary Gala at their state-of-the-art facilities in Clanabogan last week where their chairman Paddy Gallagher is pictured with Tyrone county chairman Ciaran McLaughlin.
Gaelic games in the area go back to the good old days when you could stand on Fiddler’s Green near the Pigeon Top in Omagh and watch your goalkeeper score a point from his kick-out with the gale-force wind sending the ball soaring back over his head and over the bar, where opposite goalposts were only visible when you would climb the steep hill to the halfway line and when you could keep goals without having to remove your cap from your head or your woodbine from your lips.

As the years rolled on, rural teams were struggling to field and on January 16 1972 in St Eugene’s Hall, Clanabogan, Tattysallagh and Tattyreagh agreed to amalgamate. The main committee members being Paddy Starrs, Pat McGlone and Pat McGread, names that have been associated with Droim Ratha throughout its history.

Forty years later, the club’s membership has soared to 524 and the club has the highest youth membership in the county. The club have had players win Allstars, players captain teams at Croke Park in All-Ireland finals, won Junior Championships, underage championships, league titles, they have been Scor champions and won an All-Ireland golf title. Meanwhile, the Clash of the Clans sevens tournament, the Great Solo Run fundraising initiative the Gaelic4Mothers and the impressive facilities at Clanabogan are all evidence of the forward-thinking club Droim Ratha has become.

And it is time to celebrate all this with the 40th anniversary gala which will be held in The Hillgrove Hotel in Monaghan on Saturday November 3. There will be guest speakers, guest compere, drinks reception, music, games and giveaways and a five-course silver service dinner. Tickets are priced at £75 and can be obtained from promoters or any of the following committee members: Eunan Kelly, Michelle Cox, Kevin Starrs, Jim McGread, Geraldine McLaughlin, Gerry McGurgan or Mary McGurgan. Details are also on the club’s website www.drumraghgfc.net.

Droim Ratha na Sarseil would like to invite all members, past and present, to come on a journey and understand why the passion of the GAA runs through your blood, revive old memories of when you scored that winning point and enjoy the craic with old team-mates whom you haven’t seen in years. 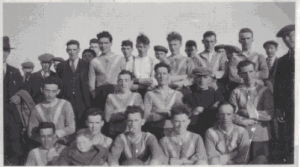