Home | Edendork’s All Ireland Champions to play at Healy Park

Edendork’s All Ireland Champions to play at Healy Park 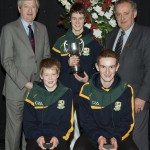 Following on from their recent success at Castlebar it has been announced that  All-Ireland Scor na nOg Instrumental Music champions, Edendork will perform at half time in the forthcoming Tyrone versus Antrim Division Two National League game .