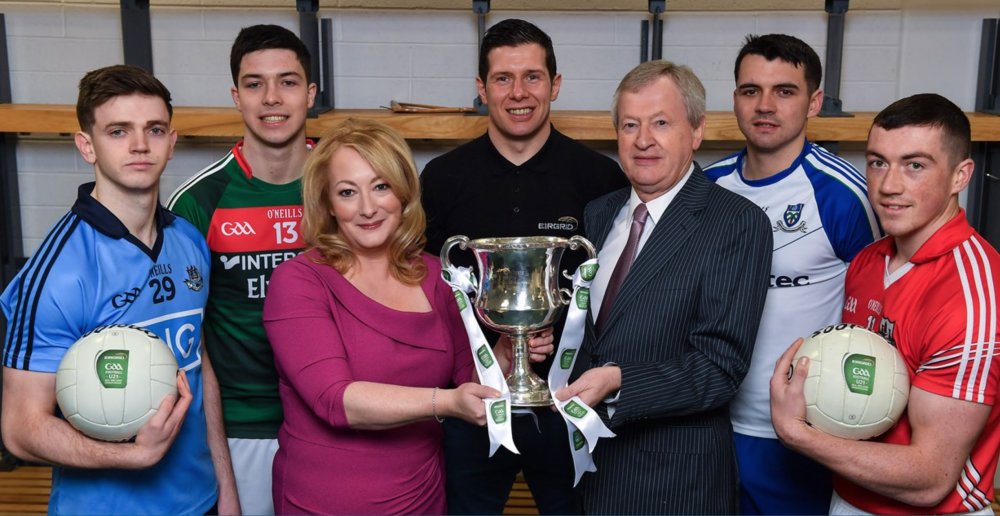 The 2017 EirGrid GAA Football Under 21 All-Ireland Championship was officially launched today in Croke Park. Mayo, the defending champions, were represented by Brian Reape while Sean O’Donoghue was in attendance to represent Cork, the beaten All-Ireland finalists and Munster champions. The 2016 Leinster and Ulster champions Dublin and Monaghan were represented by Cillian O’Shea and Mikey Murnaghan respectively.

EirGrid, the state-owned company that manages and develops Ireland’s electricity grid, enters its third year of sponsorship of this competition and again has a programme of activity planned to promote the Championship and recognise the talent on display at this grade.

This year EirGrid will work with the Gaelic Writers’ Association (GWA) to select the top player in each province and recognise their efforts upon conclusion of the provincial stages. Then, following the Championship, EirGrid will recognise the top 21 players in the competition through the EirGrid 21 Under 21’s which are chosen by the GWA and EirGrid’s ambassador. Tyrone’s Sean Cavanagh, a former U21 Football Ulster champion, will work with EirGrid this season as an ambassador to promote the competition.

The first throw-in of the 2017 Championship is in Leinster on February 22, Ulster and Munster games commence on March 8, while Connacht games will begin on March 11.

Speaking on behalf of the GAA, Director General Paraic Duffy said: “Since its inception in 1964 the EirGrid U21 Football Championship has been so much more than a stepping stone linking minor and senior, but has always been an outstanding competition in its own right.

“Go down through the list of teams who have carried off the Tim Clarke Cup and it will be dotted with so many of the legends of Gaelic football who signposted their emerging talents with their displays at this grade.

“It remains the case today.  These young stars are the senior heroes of tomorrow and give us great hope and confidence in the future of our Association, while the knockout nature of the competition is a great reward for teams that show consistent high performance.

“I would like to acknowledge the support of EirGrid and welcome the new initiatives which will enhance the interest levels even further.”

EirGrid Director of External Affairs, Rosemary Steen said: “We are extremely proud to partner with the GAA and sponsor this Championship which affords us the opportunity to get behind the most talented young footballers in the country.

“At EirGrid we manage and develop Ireland’s electricity grid and our business mirrors this Championship in that it covers the entire country. We need to ensure that there is a bright future ahead for the young people of Ireland. With the incredible talent on display in this Championship we are sure that the future of Gaelic football is very bright for years to come.

“On behalf of EirGrid I would like to extend our very best wishes to all players, managers and backroom teams, as well as their parents and families, for the Championship ahead.”