Darcy Park in Tattyreagh will bring the curtain down on the 2010 Tyrone club hurling season, this Sunday afternoon, when Dungannon Eoghain Ruadh lock horns with fierce adversaries Carrickmore Eire Og’s for the right to be crowned Tyrone Minor League champions. 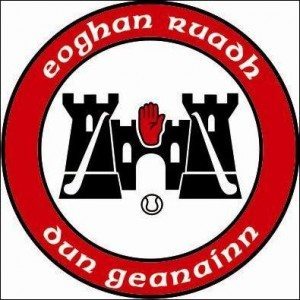 The decider is a repeat of their recent Championship final meeting in Eglish and, if that meeting is anything to go by then Sunday’s latest instalment should well be worth the trip. Dungannon won that clash back in October on a 2-14 to 2-9 score line and no doubting they would dearly love to complete the double over the Eire Og’s. Carrickmore went into the game bidding for their thirteenth consecutive success, at this level, but on the day, they came up against a dogged Dungannon side that were intent on winning.

Carrickmore contributed to an excellent advertisement for underage club hurling in the county and, before a sizable attendance the efforts of both teams could not be faulted. Under the guidance of Stephen Donnelly, Cathal McErlean and Ciaran Coyle Dungannon will be confident of completing the domestic double. The Eoghain Ruadh teenagers suffered a very disappointing Ulster Club Championship defeat to Keady in Ballinascreen recently, but Sunday offers them the perfect opportunity to end the season on a high.

Damien Casey captains the team and the Tyrone minor starlet has already proven himself to have a very bright future in the game. He contributed seven points in the recent Championship success over Carrickmore but he has plenty of invaluable assistance throughout the team with Conor McNally, Tony McCrory, Phillip Barker, Ciaran McCrudden and Matthew Mulgrew all more than capable of tagging on winning scores.

Carrickmore may have relinquished their grip on the Tyrone Minor Championship crown, but the Eire Og’s are still a talented force and will have more than a peripheral role to play in this weekends league decider. Brendan Begley captains the team and, it is a telling statistic of his ability that Begley played at corner back in Sunday’s senior side that lost narrowly to St Johns from Belfast in the Ulster Intermediate Hurling club final. A natural leader Brendan’s individual tussle with Damien Casey could well be one of the highlights of the afternoon.

Goalkeeper Conor McElhatton also played in that senior final last weekend and he will be looking to end the season on a high. Peter Kerr has nurtured a developing team throughout the years and, his patience and devotion to hurling cannot be under estimated. The Eire Og’s are a strong team and on their day they are more than capable of giving Dungannon numerous problems. Liam Armstrong, Dermot Begley, Brian McGurk and Declan Mullan will have leading roles to play