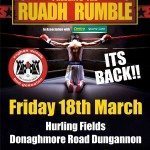 Marcus Galvin and Buster Hamilton’s heavyweight battle will be the headline fight in an 11-bout feast of action to kick-start a weekend of events organised by the Eoghan Ruadh Hurling club in Dungannon. First fight of the night features Eoghan Ruadhs Eugene Molloy in action against Shaun Coulter of Thomas Clarkes GFC with the bell sounding at 7.30pm.

Entry to the boxing is £20, to the children’s show is £6 while admission to see Adrian night is priced at £10. Weekend passes for both evening events are priced £25. Tickets are available from club members locally and at various outlets around Dungannon.
When the dust settles on the Friday fight night, Saturday afternoon is set aside for the young ones with a special show for children. Later on Saturday evening, comic hypnotist Adrian Knight takes to the stage and is likely to cause a few uncomfortable moments as he casts his spell on audience members.