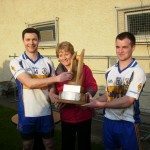 Errigal Ciaran retained the senior league title thanks to a hard earned 1-13 to 1-8 win over county champions Coalisland in the final at Eglish on Sunday afternoon. It was honours even at the end of an uneventful opening quarter with Stephen Curran, Plunkett Kane, Ronan McRory and Peter Harte among the points for their respective sides. The outstanding Davy Harte then hit the first of his three points before John Kelly found the net in the 22nd minute to put the defending champions well in control. Gerard Toner and Kane though had points for the Fianna to leave them only four in arrears at the break. Substitute Dermot Thornton reduced the deficit on the restart before Coalisland got right back into the game at the end of the third quarter with a well taken goal from their captain Plunkett Kane. Errigal Ciaran though refused to panic with Peter Harte, Enda McGinley and Ciaran McGinley all supplying points before Coalisland were reduced to fourteen men when defender Liam Wylie was sent off for a second yellow card offence. Paddy McNeice had a Coalisland point but it was Errigal’s day with the Hartes Davy and Peter notching late points to ensure victory.