It has come as no surprise that the Errigal Ciaran versus Derrylaughan Under Twenty One championship game has also fallen foul of the poor weather. The snow and frost of the past forty eight hours have resulted in serious disruption to many sporting events throughout Tyrone over the weekend. Although Errigal Ciaran had conceded that the game was unlikely to go ahead at Dunmoyle club officials had been frantically seeking an alternative venue. 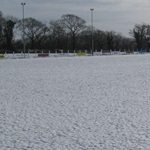 Unfortunately with the deterioration in conditions and the drop in temperatures their search proved fruitless and the game was called off late this evening. It is likely it will be rearranged for next weekend but that is also dependant on the weather. It is fair to say at this stage that the vocational schools finals due to take place on Monday night in Omagh may also suffer a similar fate to this game.