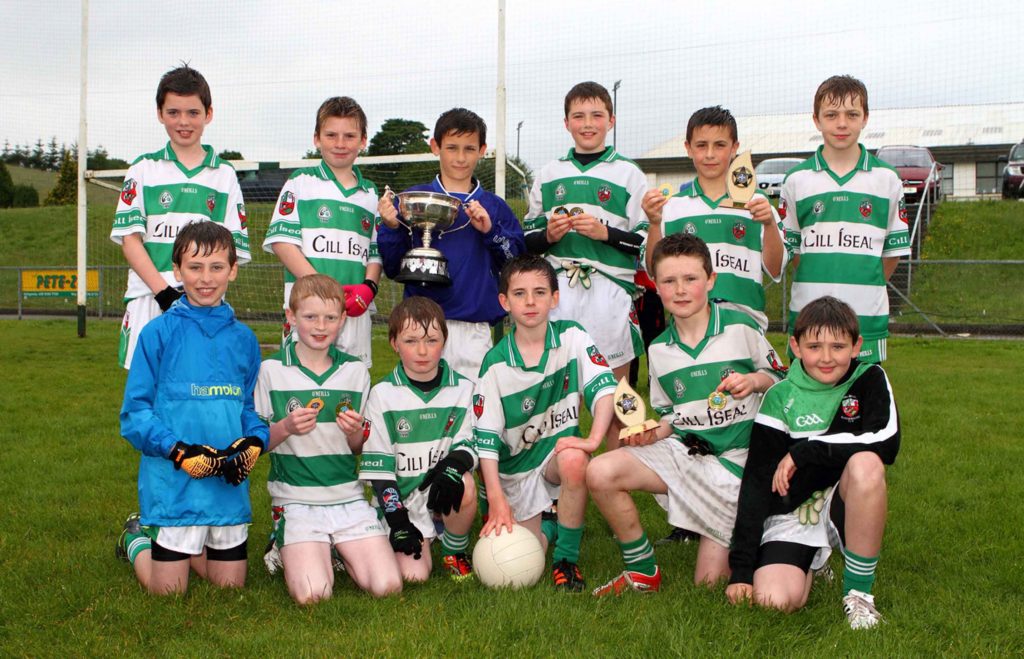 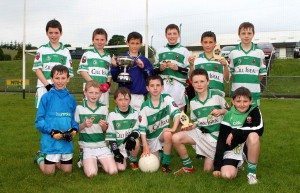 After all the league games were played off in the morning, the teams that emerged to make the Cabragh Cup semi-finals were St Mary’s P.S. Cabragh, St Mary’s Pomeroy, St Mary’s Ballygawley and St Patrick’s Roan. Heavy rain was falling by this stage of the afternoon and teams had to change their tactics to suit the conditions. Two keenly contested semi-finals saw St Mary’s Cabragh and Roan P.S. come out on top, both teams undefeated throughout the whole day ….but this statistic was going to change for one unfortunate side.

Cabragh started brightly in the first half with Louis Conlon scoring an excellent solo effort goal and then goalkeeper Jason Doyle stepped up to split the posts with a well-taken 45, it certainly was a scene reminiscent of Stephen Cluxton’s point in last year’s All-Ireland final. Roan P.S. (led by Mr Seamus Mc Creesh) refused to drop their heads however and they hit back with two goals of their own in the second half. Louis Conlon and Brendan Mc Glone added further points for Cabragh and they held out in the dying minutes for a 3 point victory to ensure the Cabragh Cup stayed in Killeeshil for the first time since 2007.

There was also an opportunity for schools that may have been caught napping in the morning’s league games to return home with some silverware as the Cabragh Shield was up for grabs for the second year. St Mary’s Aughnacloy, St Patrick’s Donaghmore, Edendork P.S. and St Joseph’s Galbally qualified for the Shield semi-finals. Again these games were played in difficult conditions but it didn’t detract from the quality of football on show. St Joseph’s Galbally (led by Mr Sean Quinn) and St Patrick’s Donaghmore (led by Mr Eddie Doris) faced each other in the final and no matter the outcome, it was going to be a good result for the parish of Donaghmore! After 12 minutes of solid football, it was last year’s Cabragh Cup winners, St Joseph’s Galbally, that came out in top in the Cabragh Shield final. 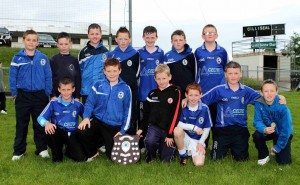 St Mary’s Cabragh principal, Mr Damian Kelly, congratulated Galbally and Cabragh on their victories this year during the presentations. He also thanked all the schools that took part in this year’s tournament and Killeeshil GFC for the use of their facilities today.