Tyrone Ladies football team may not have won the All Ireland this year but their performances in the latter stages of the championship certainly helped to raise the profile of the team. Their fantastic victories over Cork and Kerry ensured recognition on a national scale and this was rewarded tonight when four players from The O’Neill County picked up All Star awards in Dublin. Sinead Mc Laughlin was joined on the podium in The City West Hotel by ace forwards Gemma Begley, Cathy Donnelly and Joline Donnelly. Mc Laughlin had a tremendous season at corner back leading by example with her tenacious tackling and never say die spirit while the Donnelly girls and Gemma Begley proved they are the equal of any forwards in the country. Gemma received further recognition as top scorer in this year’s championship campaign. 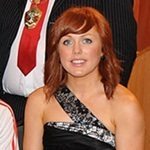 Coming on the back of a very successful County AGM on Tuesday last, it is hoped the air of optimism currently pervading the Ladies game will be further boosted by the news of these fantastic individual awards. All at Teamtalk would like to take this opportunity to congratulate the girls on tonight’s achievement and wish them every success for 2011.

They may not have got their hands on the Brendan Martin Cup in September but four Tyrone lady footballers have joined the elite ranks of the game as they were confirmed as All Stars on Saturday night bringing Tyrone’s haul of awards to eleven since 1991.

Drumragh’s Sinead McLaughlin, An Charraig Mhor’s Gemma Begley and St Macartan’s duo Cathy and Joline Donnelly were all rewarded for a tremendous 2010 campaign that saw Tyrone contest their first All Ireland senior final.

The awards were handed out at a lavish function in Dublin’s City West Hotel on Saturday night.

McLaughlin captained Tyrone this season, while the Donnelly’s and Begley were constant threats to defenders up and down the country as Tyrone tore up the script to reach Croke Park. Gemma of course who claimed an all star in 2007 also collected the Golden boot top scorer award in the senior championship this year.