Home | Fianna Made To Work Hard For Victory

Fianna Made To Work Hard For Victory 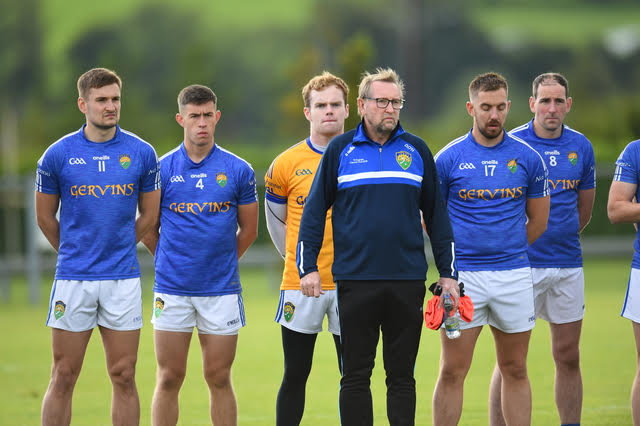 Coalisland will play holders Trillick in the LCC Senior championship semi final in a repeat of twelve months ago at the same stage but they were made to work hard for their victory against Derrylaughan at Pearse Park in Galbally.

The Fianna went into the game as overwhelming favourites but Derrylaughan gave as good as they got to frustrate the winners. It was 0-3 apiece at the end of a low scoring opening half and when Coalisland move seven clear it looked all over bar the shouting. A Ciaran Gervin goal though gave the Kevin Barrys a glimmer of hope and they raised their game to close the gap to two points. The Fianna though had the final say via a Michael McKernan point  and at the final whistle they were relieved to have made it through to the last four of the competition.

Cormac O’Hagan opened the scoring from a sweetly struck long range free but Derrylaughan levelled matters with a well taken point from play from Tomas Carney. Tiarnan Quinn and Carney exchanged points to leave it 0-2 apiece at the end of the first quarter. Scores continued to prove difficult to come by with midfielder Plunkett Kane scoring from play for Coalisland and Darragh Carney knocking over a Derrylaughan free to complete the first half action.

Two long range O’Hagan frees gave Coalisland the edge on the resumption before a fine effort from play from Quinn left three between the sides. Derrylaughan were then dealt a blow when they had defender Mark Robinson sent off and sixty seconds later things got worse for them when Quinn fired to the net. Derrylaughan lost keeper Michael McGrath to injury as that goal went in and that meant a lengthy stoppage before he was stretchered off. When O’Hagan knocked over another free it was 1-7 to 0-3 and there appeared no way back for Derrylaughan.

With six minutes of normal time left to play the Loughshore men were thrown a lifeline when Ciaran Gervin punched the ball to the net. James Donnelly added a brilliant point but moments later the same player was black carded to leave Derrylaughan down to thirteen men. Bailey Leonard and Stephen McGrath swapped points but Derrylaughan weren’t going away with Donnelly rejoining the action again. Carney hit a great score with his weaker left foot but the Fianna held their composure with that quality strike from McKernan late on completing the scoring.