This week’s Friday Feature is slightly different to those that have gone before. Today we feature Carrickmore’s Anna Mc Caughey, a lady  who has given over three decades of service to The GAA at both club and county level. Anna blazed a trail for female members of the Association at a time when being involved with The GAA was far from easy and for a woman, with a young family and a full time job, it was even more difficult. 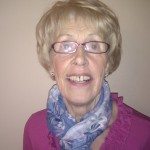 Carrickmore as a club has always been known as a forward thinking and innovative while at the same time possessing a deep appreciation of its history and traditions. Once again they are leading the way in terms of inclusion with the appointment of their Club President for this year.

In a week where we read about two very well paid professional broadcasters being removed from their positions due to their sexist remarks about the place of women in sport, it is a pretty good time to look back at how this club led the way in terms of involvement of women in the club.

Nowadays women play a much more prominent role in all GAA matters and regularly occupy the top positions in many clubs within Tyrone. Even our County Executive has had for quite a few years several very competent and highly placed female members within its ranks.

However this was not always the case and the thought that a lady’s job revolved around making tea or washing jerseys was a widely held view up until quite recently in some clubs. The club that led the way in female integration was of course Carrickmore and once again they have created their own little piece of GAA history by electing Anna Mc Caughey to the post of Honorary President of the club for 2011.

Now anyone who knows anything about football, Scor or Club and County Administration over the past thirty years will be very familiar with Anna. Rarely if ever could you have gone to any Scor event or a championship match within Tyrone over the past twenty five years without bumping into Anna. Her infectious smile and enthusiastic personality was as much part of Scor as the tea and sandwiches for the competitors.

Anna has had a life long affinity with The GAA and always followed with interest the fortunes of her club and county sides even during times when it was far from easy or politically correct to display such leanings. She first became active in Carrickmore club in 1979 and the following year became assistant secretary to James Mc Elhatton, a position she held until 1984. That of course was Centenary Year and there was an awful lot going on in GAA circles at that time to mark the hundredth birthday of the association. Anna was to the fore of the organising and administration of much of the celebratory activities that took place within Tyrone.

Then in 1985 she took on the role of club secretary and held that post until 1994. Indeed she only retired as a serving club officer in 1999 having given over twenty years of dedicated duty to her club.

During that time Anna also played a prominent role in the County Executive particularly on the Scor Committee under the leadership of Brian Mc Larnon. She chaired the Scor Committee herself from 1984 until 2000 when she stepped down and handed over the reins to Donal Magee. She also played a prominent role on The Ulster Council Scor Committee during these years. Ask anyone who has worked with Anna over the years and they will gladly testify to her ability, integrity, dedication and above all her sense of humour.

She was one of the first female members of the GAA in Tyrone to hold high office in both her club and her county. She did so with great distinction but always in a fair and even handed way. This latest honour, bestowed on her by her own club, in a sense takes her back to where it all began and it is a fitting tribute to a lady who has given more than three decades of dedicated service to an organisation she holds dearly. It is a richly deserved accolade and I am sure Anna will carry out all the responsibilities of her post with the respect and dignity they deserve. Well done to Carrickmore club for honouring Anna in this way and well done to Anna on the role she has played in The Association, particularly in raising the profile of women within it.

Enjoy your year as President of your club Anna and I am sure, as its first female President, you will bring your talents and skills to the post in a way that only you can.