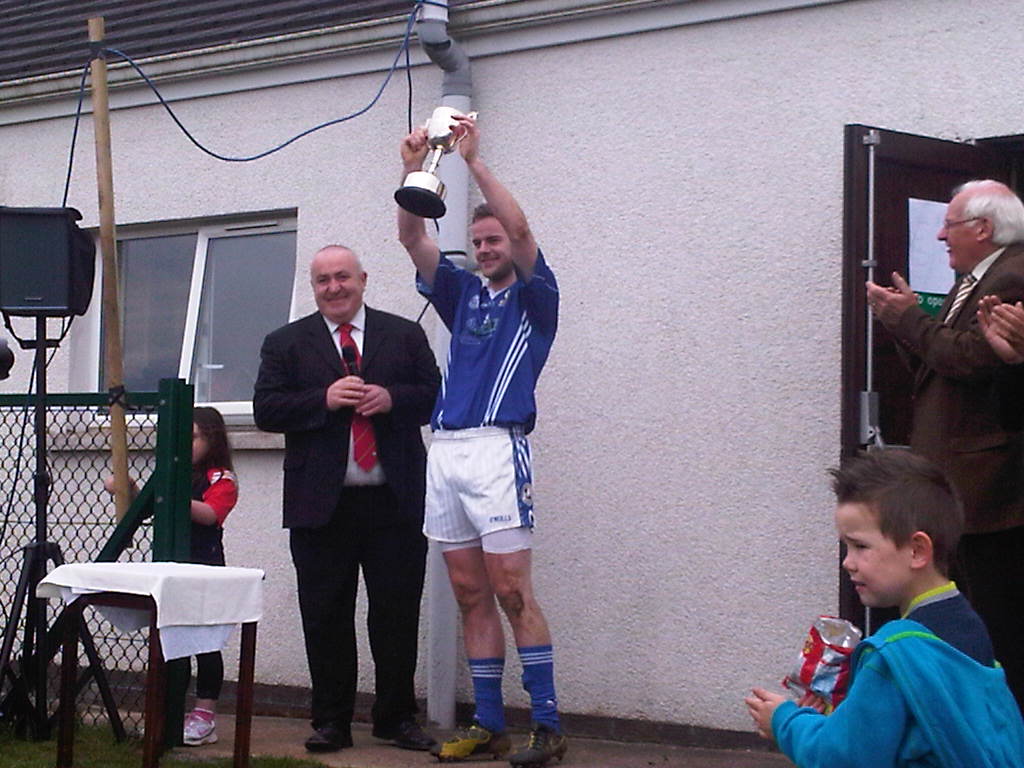 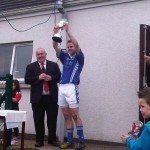 Galbally and Eskra produced an exciting Ulster Intermediate league decider at Aghaloo with pre match favourites the Pearse’s shading the verdict 1-16 to 3-08.

Galbally started the game brightly and they soon raced into a commanding 1-04 to 0-01. Paddy Corrigan netted for the Blue’s in the 14th minute after a tidy left foot finish while points from Kieran McCrory, Paul Rafferty, and a Mickey Murphy brace put Galbally in a commanding position as they threatened to run away with it, Eskra’s solitary point in the opening quarter coming from a Peter Hughes free in the 7th minute.

Paul Rafferty and Paul Turbitt exchanged points for their sides on 24 and 27 minutes but Eskra finished the half the stronger, a late first half flourish saw The Emmetts score 1-03 without reply to level the sides at 1-05 a piece with Paul Turbitt, Niall Marlow and Paul Meegan pointing for Eskra before the latter drilled home an excellent left footed goal from the edge of the box

Galbally were back in front following two Blaine Nugent points before Eskra had midfielder Stephen Beattie sent off on 43 minutes after he picked up his second caution of the game. A pair of Peter Hughes points was sandwiched in between points from Ryan McGurk and Mickey Murphy as Galbally continued to hold that two point cushion as the game entered the final ten minutes. Points from Paddy Corrigan and Kieran McCrory looked to have sealed things for Galbally as they led 1-11 to 1-07 with 57 minutes on the clock, but just like the opening period Eskra finished the half the stronger as Niall Marlow pointed to reduce the deficit to three as the game entered added on time.

With the second of two addional minutes at the end of the second period almost up Eskra were given an unlikely way back into the game as they were awarded a penalty with what was the last kick of the game, and the ever reliable Peter Hughes fired the ball past Mickey Corr to send the game into extra time.

Eskra boosted by Hughes’s late penalty in normal time started extra time in great form as substitute Darren McCaffrey fired past Mickey Corr from close range to find the net. A major upset now looked on the cards as Eskra led by three points but remarkably that was to be Eskra’s last score of the game as Galbally took full control.

Galbally scored two points at the start of the second period from Paul Rafferty and Paddy Corrigan to bring the sides level 1-14 to 3-08 with 5 minutes of extra time left.

Late free kicks from Ryan McGurk and Paul Rafferty ensured victory for Galbally as they held on to edge the verdict on a final score line of 1-16 to 3-08 in what was a thoroughly enjoyable game for everyone who was present with the outcome right in the melting pot up until the very end as Galbally picked up their first silverware of the season but will be under no illusions that there is still a lot of work to do ahead of their opening league game at home to Newtownstewart early next month.