This week 30 primary schools across Tyrone took part in annual Allianz Cumann Na mBunscol Indoor Blitzes for girls and some schools such as Loreto Primary in Omagh taking part for the first time. Heats were held in Omagh, Cookstown, Dungannon and Clonoe. After a very high standard of football by all teams the following schools emerged victorious and will compete in the Tyrone Finals Day to be held in Omagh in late March. 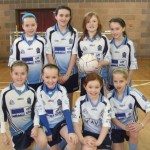