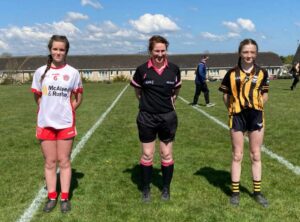 Tyrone ladies under 14 and under 16 sides enjoyed big championship wins at the weekend with the under 16s defeating a highly rated Donegal side and the under fourteens seeing off the challenge of Kilkenny.

Some great defensive work by the young Red Hands restricted Donegal to only four points in an impressive second half. Shauna Teague hit her team’s fifth goal of the match and finished top scorer on the day with 2-3. Tyrone’s other second half points came from Aoibhin Kelly, Sorcha Gormley, Shannon Byrne and Nicole Donaghy.

Meanwhile the under 14 were on their travels as they faced Kilkenny in the quarter final. Rita Hannigan’s side was dominant from the off but did concede a few second half goals that made the game look closer than it actually was. Isabella Grimes and Lucy Mc Cullagh bagged first half goals while Ella Tracey and Mia Muldoon were among the points.

Kilkenny did improve after the break but Tyrone’s ability to hit the net kept them in front and in control. Erin Daly, Erin Mc Ginn and Lucy Sheridan scored goals for the Red Hands while Isabella Grimes, Lucy Mc Cullagh and Cara Mc Moran hit points.