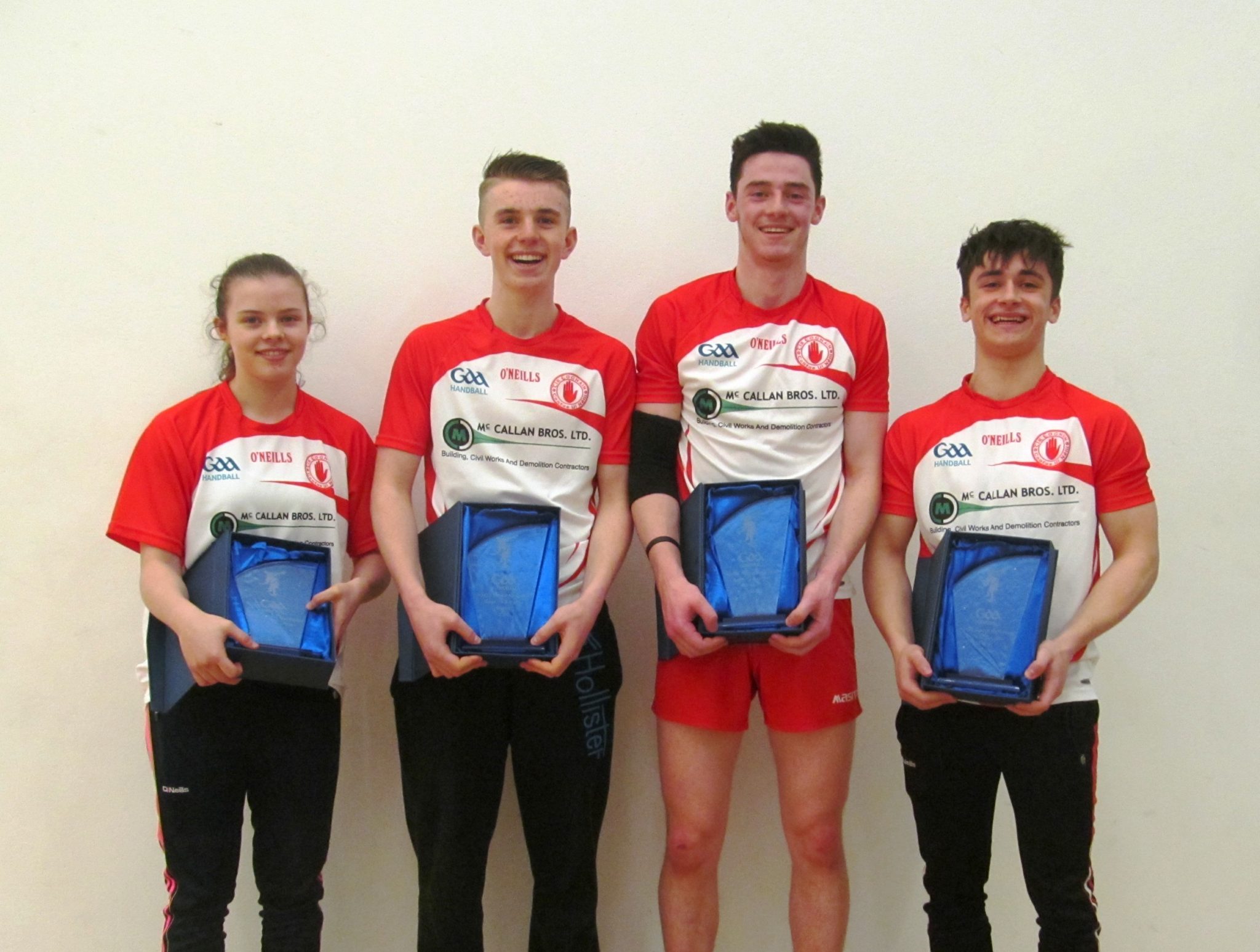 Tyrone handball has enjoyed some memorable days on the national stage in recent years and last Sunday was definitely another one as the county captured an incredible four out of a possible eight grade A titles at the 2016 Irish junior nationals event in Galway.
A total of 25 Tyrone representatives were among almost 300 players who converged on County Galway for the 40×20 nationals, which were staged at nine different venues, and what a weekend it turned out to be.
Six of those Tyrone players progressed to major finals, with four going all the way and making sure that Tyrone took 50% of the main titles on offer at the fabulous Moycullen complex on Sunday. 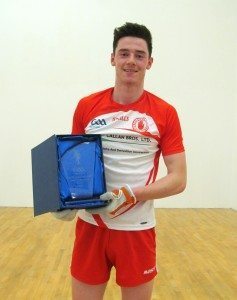 Two of the Tyrone winners had done it all before at this massive annual event but it was still every bit as sweet this time round for Sean Kerr and Johnny Woods, particularly for the latter who has now signed off on his glittering underage career in the best possible way.
For the Fox family from Loughmacrory, Sunday was a day that will live long in their memory as Mairead became the first Tyrone player to win the girls 13 & under title before her older brother Antoin picked up his first winners prize at the Irish nationals with a narrow victory over Lorcan McBride in an epic all-Tyrone showpiece. 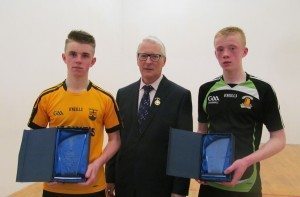 There is no doubt that the Tyrone players made a big name for themselves in Sunday’s finals programme, and there was little argument over which final turned out to be the match of the day as Antoin Fox and Lorcan McBride, All-Ireland colleges doubles champions together in the colours of Omagh CBS, produced a scintillating contest laced with handball of the highest quality.
Both players had negotiated a hot field of contenders to reach the final, with Lorcan really catching the eye with his semi-final win over last year’s All-Ireland under-16 champion, Peter Donohue.
Lorcan, fresh from his recent All-Ireland under-16 doubles success, certainly carried his dazzling form from the semi-final into the final as he turned on the style in the opening game and won it in impressive fashion, 15-9.
However recent All-Ireland under-16 singles runner-up Antoin has been growing in stature this year and now has the big game temperament required to star at the highest level, as he showed by taking the second game on a scoreline of 15-10.
The tiebreaker was a thrilling affair, which initially seemed to be going Lorcan’s way when he surged into a 6-3 lead, but the pendulum was soon swinging Antoin’s way as he gained momentum and stormed into a 10-7 lead.
However the winning ace was proving elusive for a spell as the rallies became even more fiercely contested and Lorcan edged closer to make it a 10-9 game.
But the Loughmacrory player was in no mood to let this one get away and he kept digging deeper until he produced the decisive point to claim a two-point victory.
The Fox family were also celebrating a couple of hours earlier when the recently crowned All-Ireland under-14 champion Mairead produced a gutsy display sprinkled with class to see off Kilkenny’s Noelle Dowling in the girls 13 and under final.
Mairead took the first game impressively on a scoreline of 15-10 but was then on the back foot for much of the second game as the Kilkenny girl upped her game and went into a 13-5 lead. 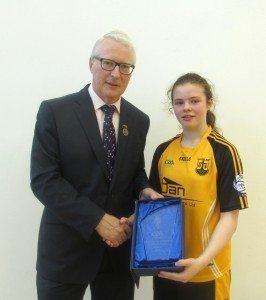 However the Loughmacrory star, who continues to create history with her brilliant achievements this year, showed her mettle once again, going through the gears to hit ten unanswered points.
Her opponent could do nothing to stop the young Tyrone star clinching a 15-13 win in the second game to ensure that her county took the 13 and under title for the first time and came home with one of the major girls prizes from the 2016 nationals. 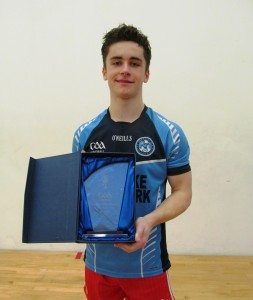 Sean Kerr, meanwhile, had already captured titles at 13 and under and 15 and under at previous nationals and the recently crowned All-Ireland minor champion was in unstoppable form in Galway as he added the 17 and under title to his stunning list of achievements.
In a repeat of that recent minor decider, Sean found himself in another great battle with Cork’s Tadhg O’Neill and after winning the opener 15-9, it looked like Sean could be heading for a tiebreaker when the Cork player carved out a 13-11 lead, but Sean Kerr has got himself out of so many tight situations with handball of the highest standard and he just raised his game to another level again to put the match to bed with some brilliant shooting.
Johnny Woods was also in magnificent form on Sunday evening and the current world 19 and under champion, and former All-Ireland minor champion, wrapped up his underage career on a really high note as he saw off Clare’s Fergal Coughlan in a quality 19 and under decider.