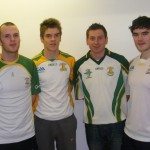 Carrickmore handballers had their All Ireland club semi final put back for another week with the aim of both semis being played before the 21st of December but we are still awaiting official confirmation of the new arrangements. As a result of this postponement Caolan Daly, Captain of the Irish Under nineteen team preparing to head off to San Diego, was able to join up with his colleagues for a weekend of intense training in Kilkenny. This is the first time that the whole squad has managed to get together for training since the qualifications from the Irish Nationals.

The six players will be put through a rigorous series of fitness sessions and coaching  over the weekend and will be receiving valuable court time/matches courtesy of three of the top handballers in the country Michael Duxsie Walsh, Michael Gregan and up and coming star Robbie Mc Carthy.

Meanwhile while all this is going on in Kilkenny Handballers in Tyrone are far from idle. There is an Ulster level one training course taking place in Carrickmore over the weekend and it will conclude on Sunday. While all this is going on a few mile up the road Beragh handball club will be in the middle of a 24hr handball marathon which finishes tonight at 9pm – with party/music in the clubrooms afterwards. We hope to have details and photographs from this event by Sunday evening.