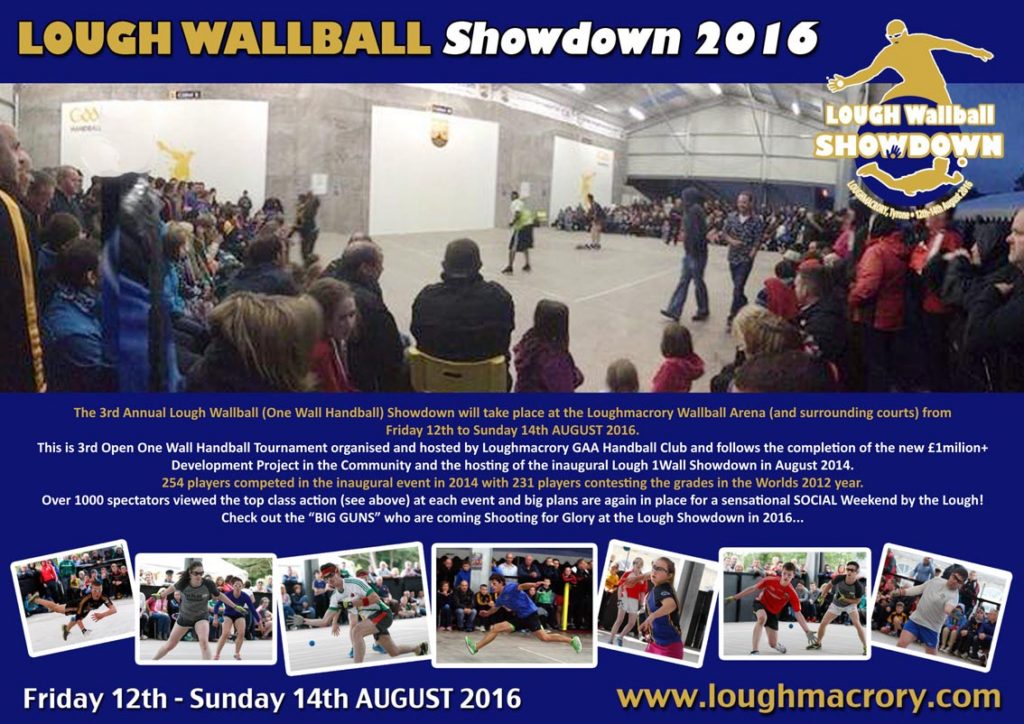 2014 Champion, Puerto Rico’s WALLY AMARO, will travel to Loughmacrory to take on 2015 Champion, Tyrone’s CONOR McELDUFF, who bids to maintain a two year unbeaten run in the code of Wallball when he bids for 3-in-a-row of Irish Mens Open Nationals titles in Breaffy Sports Arena.

They are just two of the stars who will converge on the 3rd Annual “Lough Wallball Showdown” Tournament, which will take place at the new Outdoor fully covered One Wall Handball Arena (and surrounding courts) from Friday 12th to Sunday 14th AUGUST 2016.

This is just the 3rd Open One Wall Handball Tournament organised and hosted by Loughmacrory GAA Handball Club yet it has already established itself as one of the most prominent in Ireland. 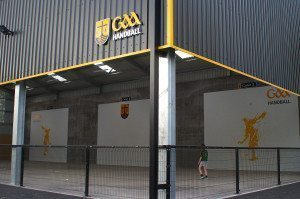 This event follows the completion of a new £1milion+ Development Project in the Community and the hosting of the inaugural Lough 1Wall Showdown in August 2014. That first event saw a huge entry of 251 players across all grades with over 1000 spectators throughout the Saturday and Sunday action.

ENTRY to the Event is now open…

The 2016 Event has already seen confirmation of a Massive Quality field in the Open Grades. Wally Amaro has confirmed he will return from Puerto Rico to try and win back the crown he secured in 2014 when denying Irish Nationals Open Champion, Conor McElduff in the final. McElduff is of course bidding now for two in a row in the Lough Wallball showdown as well as 3-in-a-row at the GAA Handball Wallball Nationals in Breaffy on the opening weekend of July.

Loughmacrory Club will also be launching a New Book in 2016 and will be conducting short profiles, interviews and taking photographs as part of a special feature to be done in the Book on the Tournament for the Book. This book will be highlighting “150 Years of Handball in Loughmacrory” and is coming on the 50th Anniversary since the previous book of “100 years of handball” in the community. Full details of the Book will be released soon.

On Saturday night 13th August at the Tournament, well know Traditional & Folk Music Band, MAD FOR THE ROAD, have been booked to play in the Loughmacrory GAA Clubrooms as part of this highly entertaining weekend and that should also be a great occasion.

Of course the Club will also hold it’s special Annual GAA Handball Club Mass at 10am on the Sunday 14th August prior to the action restarting at the Wallball Arena (walking distance from the Chapel) from 11.30am again.

• Entry Deadline is FRIDAY 15th JULY 2015. This deadline will be adhered to in order to guarantee all players Tournament Tee-Shirts for the event.

• Entry Fee entitles players (All Singles Grades Only) to: Entry to specified event, Lunch & Refreshments for all Players on each day & Tournament Tee Shirt. All players are guaranteed a minimum of two matches at the event and in most grades will be guaranteed 3 matches.

• The Loughmacrory Community will host many players travelling to the Tournament as we did in 2014 & 2015, so let us know well in advance if this is required.  OR a full list of B&B and Hotels is on Loughmacrory.com if preferred.