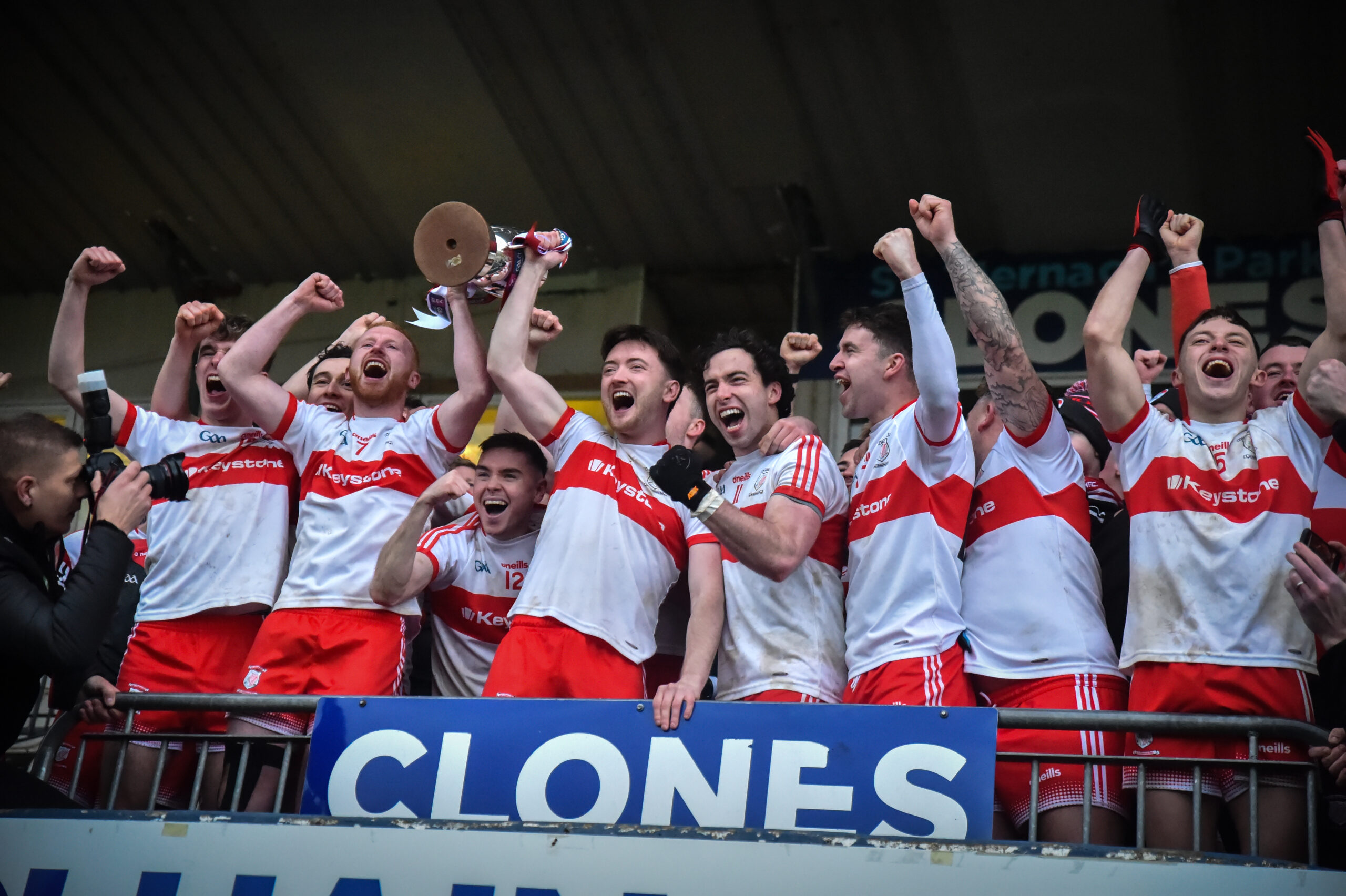 Drama piled up high on top of drama in Clones on Saturday afternoon as Tyrone champions Stewartstown eventually overcome Cavan side Drumlane after 60 minutes, 20 minutes extra time and 7 penalties apiece.  What an advertisement for the Ulster club championship.  In the end the difference between the two sides came dow to a penalty converted by Harps man Theo Lowe and one missed by Drumlane’s Rory Connolly.

Stewartstown rolled over a number of teams in this years Tyrone and Ulster club championship but they came to the realisation early on that Drumlane offered a very different proposition in terms of intensity and skillset.  Drumlane led 0-4 to 0-2 after just 15 minutes.  Daryl McGurran opened in the scoring in the first few seconds and that score was added to in the 2nd minute as Rory Connolly converted a free for the Cavan men.  The Harps had a goal chance in the 4th minute but Mark Rooney’s shot whipped past the post and over the end line.

Gareth Devlin opened Stewartstown’s account in the 6th minute with a beautifully struck free that curled just the right side of the left post.   Two Drumlane points from McGurren and Darragh Dolan eased the lead out to three points by the 13th minute but Devlin hit another Harps free to reduce the gap to two by the quarter hour mark.  From there to the break it was tit for tat on the scoreboard.  Rory Connolly converted another two frees either side of a Theo Lowe mark and Gareth Devlin matched that with another two frees either side of a Cormac Flynn point from play.  Half Time – Stewartstown 0-5 Drumlane 0-7.

Stewartstown were first on the scoreboard after the break as Tiernan Rush landed a free.  Within three minutes of that score he would be off the field following a second yellow card.  Worse was to come for the Harp as Gareth Devlin appeared to tweak a hamstring and he had to be withdrawn.  By the 39th minute the Drumlane lead was restored to two points thanks to another Rory Connolly free.  Substitute for Gareth Devlin, Anton Coyle landed his first score of the match from a free in the 41st minute before Connolly raised the white flag from a free in the 43rd minute.

As the game entered the final quarter the match became much more frantic.  Two more frees from Anton Coyle levelled the contest but that was shorted lived as Ryan Connolly landed his 6th score of the game this time from play followed by another free.  14 man Stewartstown were in a bad place but they dug in and were rewarded with two converted frees from Dan Lowe in the 57th minute and Anton Coyle in the 60th minute.  A Conor Quinn point in the final minute of normal time looked like it might win the match but Drumlane found a way to win another free and Ryan Connolly held his nerve to send the match into extra time.  Full Time – Stewartstown 0-12 Drumlane 0-12.

There were only two scores in the first period of extra time.  A well taken Dan Lowe penalty in 68th minute and a Ryan Connolly free in the 71st minute.  Stewartstown didn’t sore in the second period of extra time and it was Drumlane that kicked two brilliant Michael Owens points from play to force penalties.

Stewartstown won the penalty shootout after seven kicks each.  Anton Coyle and Theo Lowe converting two penalties each and Dan Lowe hammering home his second penalty of the afternoon. 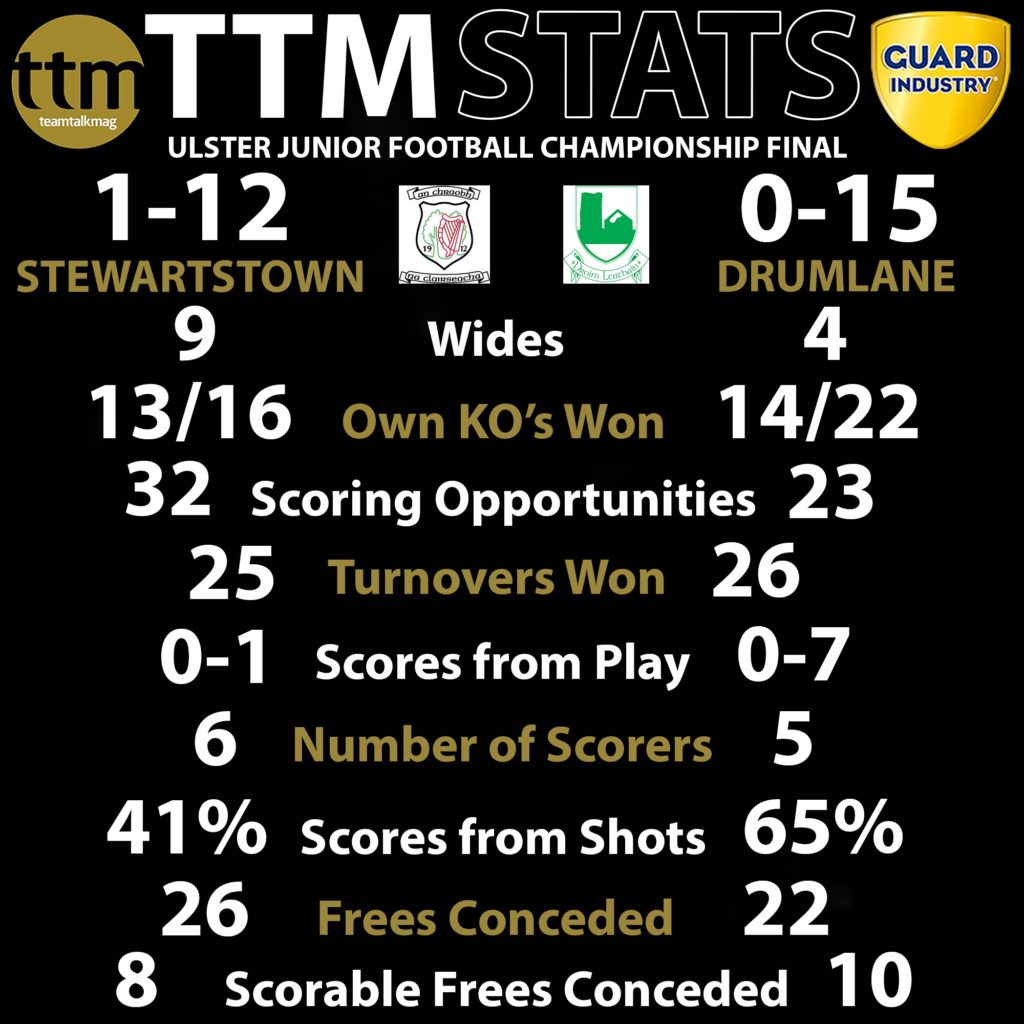 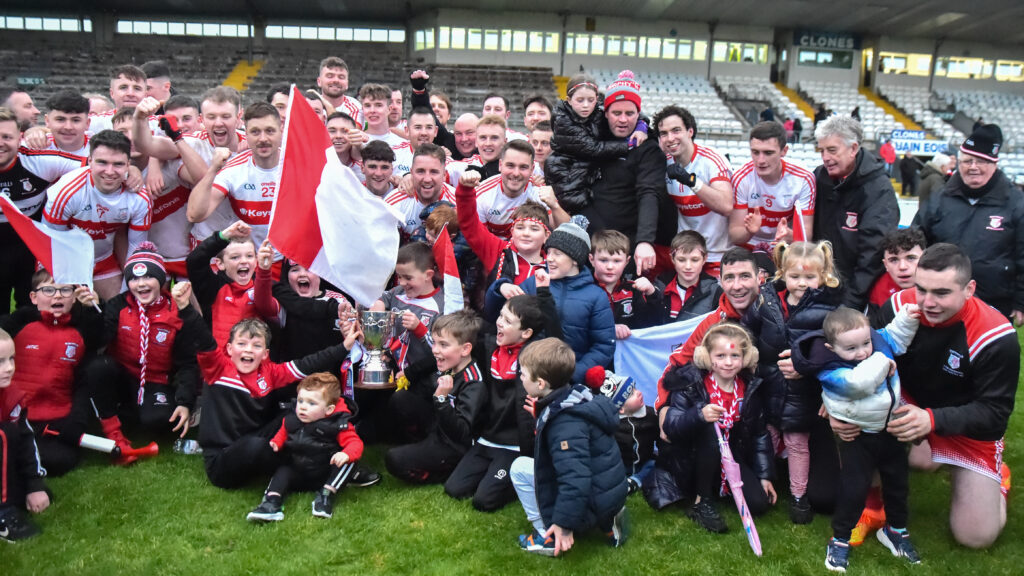