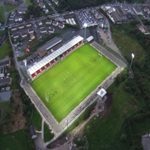 Healy Park will host the first of this season’s MacRory Cup semi finals next Friday night when St.Patricks Academy will bid to make it through to their third final in four years when they take on St.Michaels Enniskillen. It’s a repeat of the McCormick Cup final which was also played at Omagh in December with the Erne lads coming out on top although the Tyrone School will have fond memories of the last time they met St.Michaels in the MacRory Cup at this venue when they produced a rousing comeback to win the 2008 final before going on to collect their second Hogan Cup title.