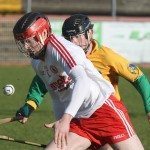 The Tyrone Senior Hurlers launched their Division Four NHL campaign with an encouraging victory over Leitrim at Healy Park this afternoon.

Tyrone were superior in every sector of the field, but an evident lack of composure in front of the posts added to their nerves, as they registered 17 wides during the course of the afternoon. Ten of them came in the first half with Tyrone holding onto a slender 0-5 to 0-3 lead before a superb move sent Conor Grogan through on goal for a decisive score after 25 minutes.

Barry Winters followed up with a point for a 1-6 to 0-3 half time lead and when, the influential Aidan Kelly supplied two of the opening three points in the second period there was no way back for the visiting Connaught men. Kelly delivering an assured display in the engine room on his way to a nine point haul that included six frees, a 65 and two sublime points from play.

With the pressure off Tyrone demonstrated some superb skills with Kelly, Cathal McErlean and Justin Kelly tagging on majestic long range points, while Tony Hughes and Shea McKiver illustrated the work rate within the team when hooking and blocking several attempted clearances. A Shea McKiver goal opened up a 2-11 to 0-6 lead after 48 minutes and Tyrone never looked back. Five of the starting forwards contributing to the score board with Martin Grogan, SP Begley and Ryan Winters excelling in defence. Leitrim relied on the accuracy of veteran midfielder Clement Cunniffe for scores with Michael Lane and Declan Ryan the only two visiting forwards to score.

A pleasing opening round performance but Tyrone wille be wary of tougher challenges ahead.