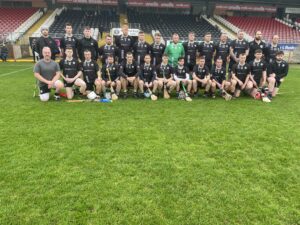 The Junior final was first on the schedule played on a surface that had been subjected to incessant rain all morning. Thankfully the field stood up well in the rain and a young and fairly eager Eoghan Ruadh side made the best of a strong wind to race into a 4-11 to 0-3 lead at the break.

A brace of goals apiece from Matthew Mulgrew and Cain Ferguson helped set them on their way to victory. Omagh knew they faced a tough assignment but to their credit they battled hard and three converted first half frees from Mark Corry helped keep them in touch early on.

However the gulf in class became more apparent the longer the game went on and second half points from Mark Mc Cann, Lorcan Devlin, Turlough Mullan and Cormac Hughes saw Eoghan Ruadh cruise to a 4-18 to 0-5 win,

Many expected the senior final would be a closer contest with Naomh Colum Cille carrying the fight to Eire Óg. However the Carrickmore based side were just too quick, too strong, too well organised and too experienced for a Colum Cille side that looked like they had been affected by the occasion.

Dermot Begley set the tone with a first minute point and from then until the end the pace never relented. Liam Armstrong, Aiden Kelly and Sean Óg Grogan hit points to put their team nine clear before Conor Grogan took an inch perfect pass from Sean Óg to fire to the net and put the game beyond Colum Cille.

The second half continued in s similar vein with the reigning champions displaying incessant hunger and commitment. They hunted in packs all evening and when in possession always seemed to have options. Oisin Daly got among the points while Aidy Kelly took his total to seven. Chris Kearns and Rory O’Neill stemmed the tide momentarily with points for NCC but Ruairi Slane and Cormac Munroe were introduced and caused mayhem in the NCC defence. Slane in particular was outstanding hitting five superb points from play as Eire Óg sealed a minor and senior double.