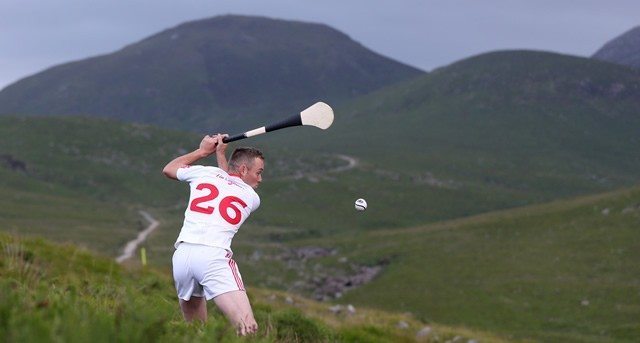 The Hills above Omagh at Pigeon Top have often been described as magnificent as they afford some of the best views of West Tyrone and beyond. However even those famous hills will not have experienced anything like the excitement of what is scheduled to take place there this week.

The Tyrone Poc Fada will go ahead on the lands of Gerry O’Kane at the peak of Pigeon Top on Wednesday June 15th.   A demanding course designed by Peter Kerr head of the Tyrone Hurling Development Committee awaits the competitors from all parts of the county, hurlers and camogs, young and old.

The Tyrone event  and the Ulster Poc Fada over the same course will be hosted by the local Drumragh Sarsfields club. The club has recently been hosting their own Caman Tir Eoghain coaching sessions for local youngsters and members have weighed in to make sure that the competition is a major success.

Peter Kerr has been full of praise for the host club and his small organising team.“ We visited the club recently and the likes of Anne and Peter Donaghy, Mark, Gerry and Vincent were so helpful to us. They couldn’t have done any more to help us. They talked to the land owner, helped sort out the course and made us feel really welcome. We talked about the idea of bringing the Ulster Poc Fada to Tyrone and our committee came up with the idea of Pigeon Top and it really has what we in Tyrone and Ulster require. Now we are really buzzing about hosting the two major events in the next couple of weeks.”

Ulster champion Paddy McKillion from the Dungannon club is expected to return to defend his Tyrone title over the tricky technical course and Carrickmore man Kerr is hopeful all the Tyrone clubs will be well represented.

“ We appeal now to all our clubs to send a representative for the adult and youth competitions. We want to get a big crowd on the mountain. It will be some spectacle. We want competitors to meet at Clanabogan Park for 6-30 and we hope to have transport up to the mountain. Drumragh is the perfect base for us”