Tyrone champions’ Coalisland have a few injury worries ahead of this weekend’s Ulster club semi final with Glenties at Brewster Park. Paddy O’Farrell is still a major doubt after missing their quarter final win over Roslea with a hamstring injury and two of his team-mates are concerns as well. 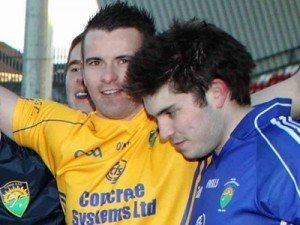 Keeper Johnny Curran missed their league semi final win over Dromore on Saturday with a groin strain while attacker Martin Early had to go off with a recurrence of his hamstring injury in the same game and it’s something that Fianna manager Damian O’Hagan could be doing without.

“It was a tough game for us to have to play a week before an Ulster Club semi final but it was great preparation for Sunday and gave us a chance to try out some different players.” said O’Hagan.

“Johnny has a groin injury and hopefully he will be okay. It was more precautionary than anything and knowing him he would play on the reserve tank if needed. Martin would be more of a concern for us at the moment. He has been unfortunate with this hamstring injury and it’s a big blow to us as he has been very good for us all year and a real inspiration whether from the start or when coming on.”