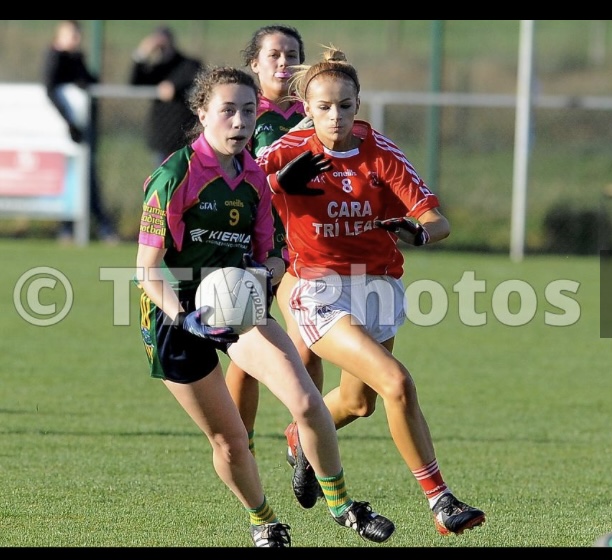 Trillick saw off the challenge of Badoney with a high scoring display. May Williamson once again top scored with 4-11 while Emma Brennan, Dearbhaile Gallagher, Fiona Owens ad Grace Mc Guinness all found the net.

Clonoe hosted Rock and showed that they are a team on the up. The first quarter was close with the O’Rahillys leading 0-4 to 0-1 but after that they dominated proceedings. Orlagh Gavin top scored with 2-7 while Niamh Donaghy and Alicia Devlin also found the net for Clonoe who won 5-13 to 0-6.

Errigal Ciaran produced a very commanding team display to see off the challenge of Sperrin Og. Seven first half goals meant the game was all but over at the break. Claire Canavan, Shannon Cunningham, Caitlin Mc Cann, Maria Canavan and Eimear Corrigan hit the net for their side as they claimed another pair of league points. Once again Meaghan Clarke showed her worth to the Sperrin Og cause with 2-3 while county star Niamh O’Neill was responsible for her team’s other four points.

Aghaloo and Drumquin put the difficult weather conditions aside to produce a very entertaining league encounter at the weekend. Both sides deserve great credit for the quality and intensity of their displays. The Aghaloo scores were shared between Riona Gildernew, Áine Sherry, Lisa Quinn, Katie Mc Ginn, Mary Kate Rafferty and Caoimhe Hughes.

Carrickmore looked impressive in their win over Donaghmore with goals from Gemma Begley, Claire Mc Gurk, Meabh Mc Elroy and Clodagh Munroe. The same players were also among the points for Carmen as was Caitlin Gormley. Michaela Mc Guigan top scored for Donaghmore while Niamh Mc Crystal battled hard throughout.

It was all square at the end between Cookstown Fr Rocks and Aghyaran and both sides will feel they deserved something from a very close and exciting game. Mind you Fr Rocks looked set for victory as they led by five points at the second water break but Aghyaran showed considerable determination to fight their way back and claim a draw. Lauren Rushe hit six points for Cookstown while Chloe Crilly (2-1) and Mairead Mullan (1-3) were also on target for the Fr Rocks.

Kildress picked up another two points following a convincing win over Galbally at Gortacladdy. Antaine Mc Namee, Sinéad Daly, Chloe Tracey and Eilis Keenan were in superb form for the winners for whom Chloe Tracey (0-6) and Eilis Keenan (1-3) top scored. Stacy Boone and Sinead Daly were also on target for the Wolfe Tones.